How real are the TV shows that focus on police and lawyers? A few go all out for accuracy, while others get laughed at by the professions they portray. But they’ve all had an impact on society…both positive and negative. 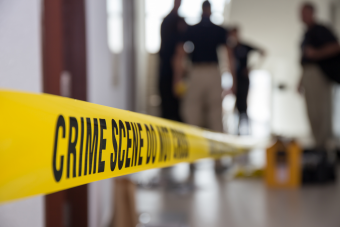 If there were no cops, prosecutors, or defense attorneys, the television airwaves would probably be far less crowded. Over the past 60 years, these professions have dominated primetime schedules. Why? They all offer formulas ready-made for drama: A brand-new conflict is presented to the protagonists each week, promising to be full of mystery, intrigue, and…predictability. Viewers can rely on the fact that near the end of the viewing hour, one crucial piece of evidence will appear and lead to the capture of the elusive killer, or to the acquittal of the wrongly accused defendant. Then comes the philosophical musing that wraps everything up neatly, providing a clean slate for next week’s episode.

Real life is rarely so cut-and-dried. And while some may argue that cop and lawyer shows are merely entertainment, actual cops and lawyers claim these shows can make their already-difficult jobs even harder.

The “CSI effect” occurs primarily inside the courtroom. Its first incarnation was referred to as the Perry Mason effect, based on the popular fictional defense attorney’s trademark ability to clear his client by coercing the guilty party into confessing on the witness stand. During Mason’s TV heyday, from the 1950s to the ‘80s, many prosecutors complained that juries were hesitant to convict defendants without that “Perry Mason moment” of a confession on the stand—which in real life is very, very rare.

After Perry Mason went off the air, a new kind of law enforcement program appeared: the scientific police procedural (which started with Quincy, M.E., a drama about a crime-solving medical examiner that aired from 1976 to ‘83). But few cop shows have matched the success of CSI: Crime Scene Investigation, which debuted in 2000 and has spawned two successful spin-offs. A 2006 TV ratings study in 20 countries named CSI “the most watched show in the world.”

Along with similar shows such as NCIS, Diagnosis: Murder, and Bones, CSI focuses on forensic evidence and lab work as the primary means of catching killers. These dramas may be “ripped from the headlines,” but when it comes to telling an entertaining story, certain liberties must be taken by the writers:

“If you really portrayed what crime scene investigators do,” said Jay Siegel, a professor of forensic science at Michigan State University, “the show would die after three episodes because it would be so boring.”

SHOW ME THE SCIENCE

The main problem caused by the CSI effect: Juries now expect conclusive forensic evidence. According to Staff Sergeant Peter Abi-Rashed, a homicide detective from Hamilton, Ontario, “Juries are asking, ‘Can we convict without DNA evidence?’ Of course they can. It’s called good, old-fashioned police work and overwhelming circumstantial evidence.” In the worst-case scenarios, guilty people may be set free because a jury wasn’t impressed with evidence that—as recently as the 1990s—would have led to a conviction. In fact, many forensic experts find themselves on the stand explaining to a jury why they don’t have scientific evidence. Some lawyers have even started asking potential jurors if they watch CSI. If so, they may have to be reeducated.

Shellie Samuels, the lead prosecutor in the 2005 Robert Blake murder trial, probably wishes that her jury had been asked beforehand if they were CSI fans. Samuels tried to convince them that Blake, a former TV cop himself (on Baretta), shot and killed his wife in 2001. Samuels illustrated Blake’s motive; she presented 70 witnesses who testified against him, including two who stated—under oath—that Blake had asked them to kill his wife. Seems like a lock for a conviction, right? Wrong. “They couldn’t put the gun in his hand,” said jury foreman Thomas Nicholson, who along with his peers acquitted Blake. “There was no blood spatter. They had nothing.” The verdict sent a clear message throughout the legal community: Juries will convict only on solid forensic evidence.

This new trend affects cops, too. CSI-watching detectives tend to put unrealistic pressure on crime scene investigators not only to find solid evidence, but also to give them immediate results. Henry Lee, chief emeritus of Connecticut’s state crime lab (and perhaps the world’s most famous forensics scientist), says that, much to the dismay of the police, his investigators can’t provide “miracle proof” just by scattering some “magic dust” on a crime scene. And there is no machine—not even at the best-equipped lab in the country—in which you can place a hair in at one end and pull a picture of a suspect out of the other. “And our type of work always has a backlog,” laments Lee, who’s witnessed the amount of evidence turned in to his lab rise from about five pieces per crime scene in the 1980s to anywhere from 50 to 400 today.

The CSI effect doesn’t stop at science—the entire judicial process is being presented in a misleading fashion. Mary Flood, editor of a Web site called The Legal Pad, asked a dozen prominent criminal lawyers to rate the most popular shows. Her findings:

Generally, they hate it when Law & Order’s Jack McCoy extracts confessions in front of speechless defense lawyers. Not real, they say. They go nuts over the CSI premise of the exceedingly well-funded, glamorous lab techs who do a homicide detective’s job. Even less real, they say. And they get annoyed when The Closer’s heroine ignores a suspect’s requests for a lawyer. Unconstitutional, they say.

In the real world, it’s usually neither the crusading prosecutor nor the headstrong cop who solves the case. Most criminals, cops admit, are their own worst enemies. Either they don’t cover their tracks or they brag to friends about what they did, or both. People tend not to think clearly when they commit crimes. But in the past few years there has appeared a new kind of criminal: the kind that watches CSI…and learns.

In December 2005, Jermaine “Maniac” McKinney, a 25-year-old man from Ohio, broke into a house and killed two people. He used bleach to clean his hands as well as the crime scene, then carefully removed all of the evidence and placed blankets in his car before transferring the bodies to an isolated lakeshore at night, where he burned them along with his clothes and cigarette butts—making sure that none of his DNA could be connected to the victims. One thing remained: the murder weapon, a crowbar. McKinney threw it into the lake…which was frozen. He didn’t want to risk walking out on the ice to get it, so he left it behind. Big mistake: The weapon was later found—still on the ice—and linked to McKinney, which led to his arrest. When asked why he used bleach to clean his hands, McKinney said that he’d learned that bleach destroys DNA. Where’d he learn that? “On CSI.”

Using bleach to clean a crime scene was almost unheard of until CSI used it as a plot point. Now the practice is occurring more and more often. “Sometimes I believe it may even encourage criminals when they see how simple it is to get away with murder on television,” said Captain Ray Peavy, head of the homicide division at the Los Angeles Sheriff’s Department. It’s difficult enough to investigate a crime scene with the “normal” amount of evidence left behind.

MAYBE DON’T SHOW THEM THE SCIENCE?

So should these shows be censored? Should they tone down the science or, as some have argued, use fake science to throw criminals a red herring? “The National District Attorneys Association is deeply concerned about the effect of CSI,” CBS News consultant and former prosecutor Wendy Murphy reported. “When CSI trumps common sense, then you have a systemic problem.”

But not everyone agrees. “To argue that CSI and similar shows are actually raising the number of acquittals is a staggering claim,” argues Simon Cole, professor of criminology at the University of California, Irvine. “And the remarkable thing is that, speaking forensically, there is not a shred of evidence to back it up.”

And furthering the debate about whether criminals learn from CSI, Paul Wilson, the chair of criminology at Bond University in Australia, stated, “There is no doubt that criminals copy what they see on television. However, I don’t believe these shows pose a major problem.” Prison, Wilson maintains, is where most of these people learn the tricks of their trade. So while law enforcement officials may agree that cop and lawyer shows do have an effect on modern investigations and trials, the jury is still out on exactly what that effect is.

The shows do have their positive aspects. For one thing, they teach basic science, saving the courts time and money by not having to call in experts to explain such concepts as what DNA evidence actually is. Anthony E. Zuiker, creator of the CSI franchise, is quick to point this out. “Jurors can walk in with some preconceived notions of at least what CSI means. And even if there are false expectations, at least jurors aren’t walking in blind.”

Perhaps most significantly, though, ever since CSI became a hit in 2000, student admissions into the forensic field have skyrocketed. So even if Zuiker’s show is confusing jurors, misinforming police, and helping to train criminals, at least it’s proven to be an effective recruiting tool. “The CSI effect is, in my opinion, the most amazing thing that has ever come out of the series,” he said. “For the first time in American history, you’re not allowed to fool the jury anymore.” And finally, a message from Zuiker to anyone who walks up and points out his shows’ inherent flaws: “Folks, it’s television.”