As we told you a few weeks ago (see: The Story Behind the World’s Most Expensive Eggs), there may be as many as seven Russian Imperial Fabergé eggs out there somewhere, hiding in plain sight. Do you have an antique egg lying around? It may be worth a lot. 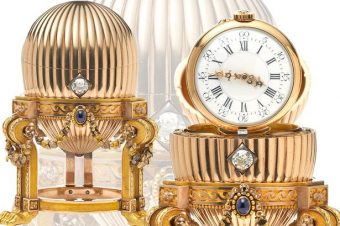 Not so long ago, an American scrap dealer who insists on remaining anonymous bought an antique golden egg at a flea market in a midwestern state that he refuses to identify. He paid $14,000 for it—that much he will say.

The egg was an exquisite example of the jeweler’s art: it was a ridged egg of yellow-gold that sat on its own three-legged, jewel-studded golden pedestal with lion’s-paw feet. When you pressed a diamond on the front of the egg, the top opened up, revealing a surprise: a ladies’ watch with gold hands. The watch had been removed from its case and mounted on a hinge so that it could swivel into an upright position, allowing the egg to be used as a table clock. The egg itself was about the same size as a hen’s egg; when seated on its pedestal, it was just 3¼ inches tall.

As beautiful as the egg was, the scrap dealer bought the egg in order to destroy it. He wanted to resell it to a buyer who would melt it down for the scrap gold. But (lucky for him) he must have guessed incorrectly about how much gold was in the egg, because not even one of the potential buyers he approached thought the egg was worth his asking price.

The man had a lot of money tied up in the egg. But he didn’t want to sell it for a loss, so he set it aside in the hope that the price of gold would rise enough for him to make a profit. Finally, in about 2013 (he won’t say exactly when), despairing of ever getting his money back, he went on the Internet and Googled the words “egg” and “Vacheron Constantin,” the name of the watchmaker inscribed on the back of the watch. The first search result that popped up was a 2011 article in London’s Daily Telegraph that read “Is This £20 Million ($33 million) Nest Egg on Your Mantelpiece?”

A picture of the man’s egg was included in the article.

According to the article, the egg was the long-lost Third Imperial Egg, one of eight missing Fabergé Easter eggs made for the Russian Imperial family between 1885 and the Russian Revolution of 1917. Czar Alexander III had given it to his wife, Marie Feodorovna, as an Easter gift in 1887. Most of the 50 Imperial Fabergé eggs were seized during the revolution, including this one. It disappeared in the 1920s and hadn’t been seen—or at least recognized—since then. No one even knew what it looked like until 2007, when researchers poring over photographs taken during an exhibition of the Russian Imperial eggs in 1902 saw the egg sitting on a shelf next to other Fabergé eggs. Through process of elimination, they were able to identify it as the Third Imperial Egg.

Then in 2011, another picture of the egg was discovered in an auction catalog from 1964, proving that it had survived the Russian Revolution and made its way to New York City, where it was sold to a woman named Rena Clark for $2,450. Neither the auction house nor Mrs. Clark had known that the object was one of the Imperial eggs.

The egg wasn’t seen again until the scrap dealer bought it at the flea market. After realizing that the egg sitting on his kitchen counter was worth a lot more than the $14,000 he paid for it, he flew to London with photographs of his egg and showed them to the experts at Wartski, a London antiques dealer that specializes in Fabergé objects. They were impressed enough to fly back to the man’s house to see the egg in person, where they confirmed it was genuine. In 2014, Wartski negotiated the sale of the egg to an undisclosed buyer. No word on how much the new buyer paid for it, but it could easily have fetched the $33 million price that the Daily Telegraph article predicted for it.

The bad news, at least as far as you are concerned, is that this egg has already been found, and you aren’t the person who found it. The good news: there may be as many as seven more Russian Imperial eggs still out there, waiting to be discovered, each worth many millions of dollars. Here’s what is known about them:

Given To: The czarina Marie Feodorovna, by her husband Czar Alexander III

Description: No drawings or photographs of the egg survive, so it’s difficult to know for certain what it looks like. All egg hunters have to go on are a few descriptions of it in the Russian archives, such as “hen picking a sapphire egg out of a basket” and “one silver hen, speckled with rose-cut diamonds, on gold stand.” It may be only about three inches tall, making it one of the smaller Fabergé eggs. And that may explain why it has not yet been recognized for what it is, if indeed it has survived at all. Since so little is known about the egg, even if it is found, it may be difficult to authenticate.

Last Seen: In 1922, when it was transferred to the Sovnarkom, the government agency that sold off confiscated property to raise foreign currency for the Soviet state. Whether it was sold—and if so, to whom—is unknown.

Given To: Marie Feodorovna, by Alexander III 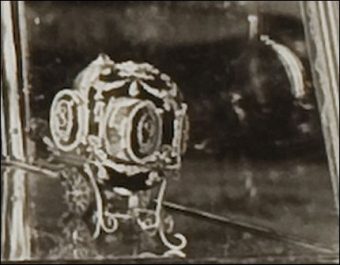 Description: One grainy photograph of the egg sitting in a display case in 1902 survives, but there’s a catch. The image of the egg is almost entirely obscured by the 1893 Caucasus Egg, which is sitting in front of it in the photo. However, a blurry reflection of the egg can be seen in the glass of the display case. Only the wheel of the chariot and what appears to be the head of the angel can be seen directly because they stick out past the Caucasus Egg. Fabergé researchers have used this information to draw a sketch of what they think the egg looks like: a single cupidlike angel pulling a large egg in a two-wheeled chariot that resembles a wheelbarrow.

Last Seen: The last confirmed sighting of the egg was in 1922, but it may have been purchased by Armand Hammer in the 1930s. If so, even he probably didn’t realize that it was one of the Imperial Easter eggs because he never advertised it as such. In 1934 he did put up for sale a “miniature silver amour holding wheelbarrow with Easter egg, made by Fabergé” at the Lord and Taylor department store in New York City. It’s possible that by “amour,” Hammer meant an angel and that he mistook the chariot for a wheelbarrow. Who bought that egg and where it is now remain a mystery.

Given To: Marie Feodorovna, by Alexander III

Description: This is Uncle John’s favorite Fabergé egg. Reason: it’s an étui (“small case”) for 13 “diamond-encrusted toilet articles.” They are the egg’s surprise. One photo of the egg survives (it was taken in 1949), but like the one of Cherub with Chariot, it provides very little information. The egg appears to be lying on its side on the bottom shelf of a display case and is almost entirely concealed behind folds of a fabric.

Last Seen: In 1952, when Wartski, the same London firm that sold the Third Imperial Egg in 2013, sold it for £1,200 (around $43,000 today) to someone listed in company records only as “A Stranger.” At the time of sale, no one realized the Nécessaire was one of the Russian Imperial eggs, so it’s certainly possible that the current owner, whoever and wherever he or she may be, has no idea either.

Given To: Marie Feodorovna, by her son Czar Nicholas II

Description: The Mauve Egg is another egg for which no pictures and few good descriptions survive. In the original invoice, Carl Fabergé describes it as simply, “mauve [pale purple] enamel egg with three miniatures.” The miniatures are the surprise contained inside the egg. They’re in a heart-shaped frame that opens into a three-leaf clover, with portraits of Nicholas, Alexandra, and their newborn daughter, Olga, on the leaves.

Last Seen: The Mauve Egg has been missing since 1917, but there’s a good chance that it has survived, because in 1978 Malcolm Forbes bought a small heart-shaped picture frame that opens into a three-leaf clover with portraits of Nicholas, Alexandra, and baby Olga. On the outside of the frame, the year 1897 is set in diamonds, so there’s little doubt that it’s the surprise for the Mauve Egg. How it came to be separated from the egg, and where the egg is now, is unknown.

Given To: Marie Feodorovna, from Nicholas II

Description: In Carl Fabergé’s original invoice, the egg is described as an “Egg in ‘Empire’ style, of nephrite [a pale or green form of jade] with gold, two diamonds and miniature.” The miniature, a portrait of Czar Alexander III, is the egg’s surprise.

Last Seen: In 1917, when the egg was sent from St. Petersburg to Moscow because of the threat of advancing German troops. After that it disappeared.

The surprise may have been exhibited in London in 1935; a catalog from the show describes a “miniature Alexander III…in a nephrite frame, let by Her Imperial Highness the Grand Duchess Xenia of Russia.” Xenia was Nicholas II’s younger sister. If she had the miniature, she may also have had the egg. But the egg did not surface following her death in 1960. If any of her seven children (or their descendants) inherited it, they aren’t talking.

Given To: Marie Feodorovna, from Nicholas II 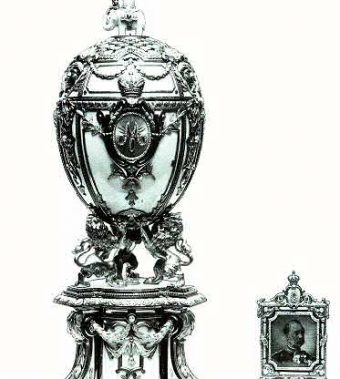 Description: A single photograph of this egg has survived in the Fabergé archives. The blue-and-white egg seated on its pedestal stands over nine inches tall, making it one of the largest Fabergé eggs. The surprise is a double-sided picture frame on a stand, with a portrait of Marie Feodorovna’s father, King Christian IX of Denmark, on one side, and her mother, Queen Louise, on the other.

Last Seen: In 1903 in Copenhagen, where Marie Feodorovna had gone to celebrate Easter and her father’s 40th anniversary as king. Nicholas II mailed the egg to her there.

It’s possible that Marie Feodorovna left the Royal Danish egg in Denmark. If so, it could be lost somewhere in the Danish royal archives or sitting on a shelf somewhere in Copenhagen’s Amalienborg Palace.

Given To: Marie Feodorovna, by Nicholas II 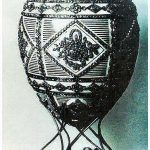 Description: One black-and-white photograph of the egg survives, as does Fabergé’s original invoice to the czar. The invoice describes it as an “egg of white enamel with gold stripes, decorated with two diamonds and 3,467 rose-cut diamonds. Inside is a gold bust of Alexander III on a lapis lazuli [bright blue stone] pediment decorated with rose-cut diamonds.” No photograph of the Alexander III bust has survived.

Last Seen: 1917. Unlike some of the other missing eggs, there is no record of this one being transported to Moscow for safekeeping during the Russian Revolution. This may mean that the egg was either destroyed or stolen before it could be protected from looters.