The Not-So-Holy Order of the Friars of St. Francis of Wycombe 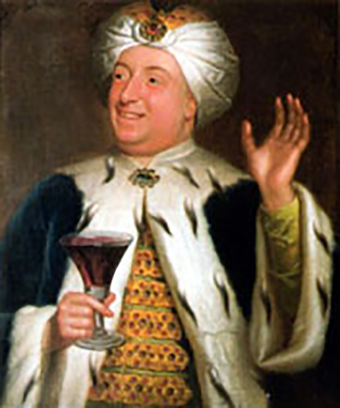 Established in West Wycombe by Sir Francis Dashwood in 1749, the Brotherhood of St. Francis of Wycombe was anything but saintly. Devoted to wicked fun and debauchery, for the next two decades, many notable individuals in England counted themselves members, such as the 4th Earl of Sandwich, John Montagu, Baron George Dodington, member of Parliament Thomas Potter, and, while not a full member, distinguished guest Ben Franklin, who was a friend of Dashwood’s and is known to have attended meetings when in town. In these meetings, the group drank, ate and fornicated at will, trying their hardest to live up to the future moniker of “Hellfire Club”.

Although the Order first met in London at the George and Vulture pub, beginning in 1750, Dashwood leased Medmenham Abbey, a rundown former Cistercian abbey, which was close to his home. Rebuilding it and excavating what are now known as the “Hellfire Caves” beneath it (a network of man-made caves extending over 1,500 feet into the hillside), Dashwood had the inscription Fay ce que voudras (“Do what thou wilt”) placed over the entrance, and the members complied.

Mocking certain religious groups, during the get-togethers, the friars referred to each other as “brothers,” addressed the leader in a given year as “Abbot” and called the prostitutes in attendance “nuns.” In those caves, they also play-acted at pagan rituals, drank copiously of wine and port, gambled, laughed and joked around and, of course, enjoyed the company of women. In the 1779 work, Nocturnal Revels, it describes the general activities of the meetings:

They however always meet in one general sett at meals, when, for the improvement of mirth, pleasantry, and gaiety, every member is allowed to introduce a Lady of cheerful lively disposition, to improve the general hilarity. Male visitors are also permitted, under certain restrictions, their greatest recommendation being their merit wit and humour. There is no constraint with regard to the circulation of the glass, after some particular toasts have been given: The Ladies, in the intervals of their repasts, may make select parties among themselves, or entertain one another, or alone with reading, musick, tambour-work, etc.  The salt of these festivities is generally purely attic, but no indelicacy or indecency is allowed to be intruded without a severe penalty; and a jeu de mots must not border too much upon a loose double entendre to be received with applause. 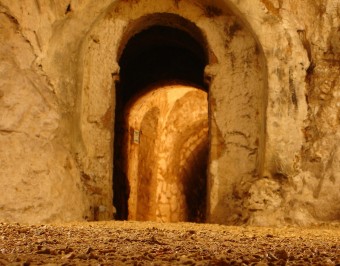 Although their mock-pagan activities ultimately led to rumors of satanic rituals at these meetings, there is no real evidence to support this. In fact, the Order’s founder, Dashwood, even devoted himself to rebuilding, at no small expense, a local church at this time, the nearby St. Lawrence. For the members, the whole charade was simply a bit of farcical fun, rather than its constituents actually being devoted to pagan ideals. Or as member MP John Wilkes put it- “a set of worthy, jolly fellows, happy disciples of Venus and Bacchus, got occasionally together to celebrate woman in wine and to give more zest to the festive meeting, they plucked every luxurious idea from the ancients and enriched their own modern pleasures with the tradition of classic luxury.”

All good things must come to an end, and the Friars’ fun began to wind down around 1762 when Dashwood was appointed to be the Chancellor of the Exchequer- a job he was terrible at. For instance, a tax he imposed on cider, the Cider Bill of 1763, so incensed the populace that they nearly rioted; he resigned shortly thereafter. By this time, he had also become a member of the House of Lords as Baron Le Despencer.

In addition to Dashwood becoming respectable, another key member of the Order, the aforementioned member of Parliament John Wilkes, was forced into exile after he was caught printing Essay on Woman, a parody of Essay on Man, by Alexander Pope. The former’s blasphemous, libelous and debauched content was considered illegal at the time, landing Wilkes in more than a little hot water. And if you’re wondering, it’s generally thought today that fellow Order member and MP Thomas Potter, son of the Archbishop of Canterbury, was the actual author of the work, not Wilkes.

Together with many other brothers having left the area or died, this Hellfire Club became defunct by 1766 and the caves stripped of their former scandalous adornments and other evidence of the noteworthy group’s former meetings there.