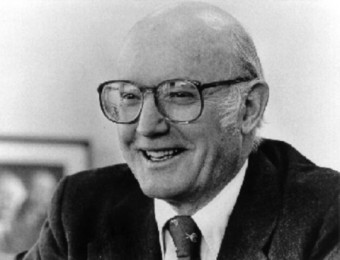 While it’s an incredibly convoluted system, the entire television industry is still basically controlled by Nielsen ratings. To this day, they have an immense impact on advertising dollars and the overall financial health of the companies that own television networks. From which TV shows are produced to how local news cover certain stories, the goal of everyone involved in television is to get viewers, which in theory, translates to ratings. It was over eight decades when the ratings system name bearer, Arthur Nielsen Sr., first made name for himself keeping track of what Americans bought at drug stores. Seven decades later, we are still using similar methods to keep up to date on people’s television watching habits. Here’s the history of the Nielsen ratings and the story of the man who still controls television to this day from the grave.

But Nielsen always wanted to open his own business. It’s not totally clear why he chose field research and manufacturing evaluation reports (perhaps because of his electrical engineering background), but using $45,000 ($633,000 today) he borrowed from college fraternity brothers, Nielsen opened the A.C. Nielsen Company in 1923. The company provided performance surveys of industrial equipment and did relatively good business initially (about $200,000 annually, which is about  $2.9 million today). But on October 29, 1929, the stock market collapsed and the country entered the Great Depression.

Not immune to these financial struggles, Nielsen nearly went bankrupt twice and was on the verge of shutting down in 1931 but, like all good businessmen, he learned how to adapt. Relaunching as the Nielsen Food and Drug Index, he began tracking grocery and drugstore purchases for brands trying to survive during the Depression. At first he did this by interviewing customers, but he soon realized this didn’t do an accurate enough job of reflecting real retail sales. So, Nielsen audited merchant ledgers and receipts from a carefully sampling of stores and relayed patterns to grocery and drug brands. This allowed brands to use real sales to compare themselves to competitors. Quickly, Nielsen became the biggest market research company in the country. But he wasn’t satisfied.

In the spring of 1936, Nielsen attended a meeting where the keynote speaker was MIT professor Robert Elder, who had recently developed the “Audimeter.” First used in 1935, the “Audimeter” was a small piece equipment attached to the tuning shaft of a radio that used wavelengths, photographic paper and magnetic tape to track what radio station and at what time the listener tuned in. Nielsen was so impressed with this relatively accurate way of tracking radio listening habits that he immediately acquired everything – the patent applications, the trademark and a warehouse full of “Audimeters.” He mechanically tweaked, and redesigned the device, as well as renaming the system to the “Nielsen Radio Index.” In 1938, Nielsen used it for the first significant radio market test in history. Calling it the “Chicago pilot,” the machine was placed on radios in 200 Chicago-area homes encompassing radios in rural, urban, farm and town homes.

It was a smashing success, so much so that within only a few years, Nielsen had nearly 50 business subscribers to his service. The information he was able to provide his customers was surprisingly accurate and specific for the time; every 15 minutes, using a percentage, he was able tell them how many people were tuning in when their advertisement or program aired. He called this the “share” of the market, a term we still use today when talking about radio and television ratings.

While Nielsen wasn’t the only company providing radio ratings research (Hooper and Crossley were other significant contributors), his was the most methodical and precise. With his background in engineering, the relative machine-like precision of the Audimeter exceeded Hooper and Crossley’s audience surveying. This disconnect also made Nielsen hard to deal with at times; he often conducted exhausting explanation seminars to potential clients and took forever to complete business deals. He also hated flying. Despite traveling thousands of miles a year for work, Nielsen refused to fly because, according to his own calculated statistics, airplane travel (at the time) had a higher rate of fatalities than other means of travel.

By the late 1940s and in the early 1950s, Nielsen had become the leading force in market research, having bought out nearly every other company. 1500 Audimeters were installed across the country, representing every possible scenario – rural household with kids, urban with no kids, small town with retirees, etc. The operation was becoming so large that Nielsen was looking for a new way to process all the results. He found it in the UNIVAC I, one of the first commercial computers. Purchasing it for $100,000 ($894,000 today), it was delivered to the company in 1955, marking Nielsen as one of the earliest adopters of this new technology.

In 1948, Nielsen expanded into television and immediately dominated the market. After the “freeze of 1948” (when the FCC put a freeze on granting new TV station licenses) was lifted in 1952, the number of stations exploded and modern television – with different programs, commercials, TV personalities – began to take shapes thanks in large part to Nielsen’s ratings. Without them, companies wouldn’t have the knowledge that directly informed the best time, the best programs and the best target audience for their commercials, ad buys and sponsored programs.

In 1957, Arthur Nielsen Senior retired, giving the company over to his son, Arthur Nielsen Junior. In retirement, Senior devoted his time to his true love – tennis. A distinguished collegiate tennis player, he actually won several United States Father-Son Doubles titles with Junior in the 1940s. In 1968, he built a luxurious tennis facility at the University of Wisconsin (where he also built a school for marketing research)  that remains to this day one of the best in the country. Arthur Nielsen was elected to the Tennis Hall of Fame in 1971 for being a “passionate philanthropist for tennis development.” Nielsen died in 1980, but his name continues to live on.

Arthur Nielsen Junior not only continued his father’s revolutionary research practices, he modernized them. He pushed for new technologies (it was said that he was the one who asked for the computer), expanding their market and diversifying the business (for instance, Nielsen Clearing House coupons generated significant extra revenue for the company). As the years passed, the Nielsen rating system has become synonymous with how television shows get judged, and while there is some controversy today with things like how they account for people streaming shows on digital devices, their data is still the gold standard for determining how a show is performing. The higher the rating, the larger sample of people are watching; the more eyeballs, the more an advertiser’s ad buy. If the rating is too low, the show gets cancelled and is no more. As Nielsen Sr. once told told Nielsen Jr., “If you can put a number on it, then you know something.”