Mantan Moreland: The Black Comedian Who Was Almost One of the Three Stooges 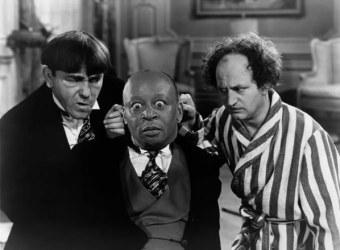 There’s a good chance you’ve never heard of Mantan Moreland. But, if you are lucky enough to have seen him in a film—any film—you’ll definitely remember him. Moreland’s comic timing manages to transcend the decades in films like King of the Zombies (1941), where he steals the show, saving what would otherwise be a completely forgettable (and by now, probably long-forgotten) comedy-horror flick. While changing attitudes about black roles in film may have hastened Moreland’s fall from popularity, he’s finally being rediscovered as the talented character actor and comedy genius that he was.

Had history unfolded just a little differently, Mantan Moreland would most likely have never become forgotten in the first place. In fact, he once came awfully close to being cast as one of the Three Stooges (more on that later). In an era when segregation was in full swing, the fact that he was strongly considered to be part of the internationally-known trio, let alone be the choice of Moe and Shemp Howard themselves, speaks to his considerable talent as a comedian.

Cutting his teeth on the brutally competitive vaudeville stage, Moreland honed his comedy skills doing several live shows a day. Vaudeville was a cutthroat business. With dozens of performers waiting in the wings, any act that faltered for even a moment would be yanked—if not booed—off the stage. Former vaudevillians like Charlie Chaplin, Buster Keaton, and Bob Hope owe their cinema stardom largely to the quick-thinking and high level of professionalism required to make it big onstage. It worked for Moreland, too. His talent as a comedian on what was then known as “the chitlin’ circuit”—the string of nightclubs and theaters deemed safe for black comedians during segregation—soon led to roles in movies.

Moreland’s earliest roles were in “race films,” made with black actors for black audiences. His first screen role was as a night watchman in a haunted pawn shop in That’s the Spirit (1933), followed by a small role as an angel in The Green Pastures (1936), a retelling of Biblical stories as black American folklore (Rex Ingram, Disney’s original choice for Uncle Remus, played “De Lawd”). Moreland was quickly moved up to supporting roles in all-black westerns like Harlem on the Prairie (1937) and Two-Gun Man from Harlem (1938), playing the comic sidekick to Herb Jeffries (better known as the Bronze Buckaroo, America’s first black singing cowboy).

Recognizing his talent, studios soon snapped him up to play comic relief roles in mainstream movies (in other words, with white casts), but his real break came when he was paired with Frankie Darro in a series of crime comedies. The two appeared in the films as porters, bellhops, or pages who stumble across murder cases (hijinks, of course, ensue). While Moreland’s performances are stereotypical of the era (he’s always the frightened one), the films represent a huge turning point on the part of the studio: Moreland and his white co-star are depicted as friends and equals. A high point of the series is when he and Darro recreate one of the bits that made Moreland a hit on the stage. The “indefinite talk” bit appears in Up in the Air (1940), and pays homage to the routine he developed with Ben Carter, in which the two would finish each other’s sentences. Like this:

Moreland: “I haven’t seen you since…”
Carter: “Longer than that!”
Moreland: “Last time I saw you, you lived over…”
Carter: “Oh I moved from there.”
Moreland: “Yeah?”
Carter: “Sure, I moved over to…”
Moreland: “How can you live in that neighborhood?”

The series came to an end when Frankie was drafted during World War II, but Monogram hung onto Moreland, recognizing him for the amazing talent he had. Perhaps intentionally, he was featured in some otherwise-lackluster films, injecting a healthy dose of humor where there would have been none. King of the Zombies (1941) is perhaps the best known, and nearly every single line spoken by Moreland is memorable, from “Move over, boys, I’m one of the gang now!” to “If there’s anything I wouldn’t want to be twice, zombies is both of them.” (You can watch the film here.)

Moreland was somewhat less valued at other studios, where he didn’t receive top billing, but his role in Universal’s The Strange Case of Dr. X (1942) caught the eye of Three Stooges cast member Shemp Howard. The two appeared together in a gambling scene, and Howard was impressed with Moreland’s comic timing. He suggested to brother Moe that Moreland would be the perfect replacement stooge, should the need ever arise.

Meanwhile, Moreland was cast as chauffeur Birmingham Brown in Monogram’s series of Charlie Chan films. While “chauffeur” certainly doesn’t sound like a memorable role, Moreland, as usual, made the character one of the most memorable parts of the series. In fact, he was the only actor to stay on board for the entire run, appearing in 15 of the 17 films. In two of the Charlie Chan films, Moreland got to reprise his indefinite talk bit with original vaudeville partner Ben Carter. Both The Scarlet Clue (1945) and Dark Alibi feature versions of the routine that made him famous, and the movies are worth a watch if just for those segments alone.

When the series ended in 1949, Moreland saw less and less work. Some attribute his disappearance to the decline of the B-movie in an era that was embracing television, but many historians and biographers think it had more to do with changing political attitudes. Black men as servants and chauffeurs were not seen as funny so much as demeaning. It didn’t help that Moreland’s shtick was to play the skittish, frightened man—another stereotype. On the other hand, his performances always seemed to transcend stereotype (and those who knew him said that the deep Southern accent and the expressions were true to how Moreland really was). His scared-out-of-his-wits characters are really not that different from the ones played by Bob Hope (see The Ghost Breakers, 1940). It’s easy to understand, though, why Moreland’s scared routine sits a little uncomfortably today, especially as he plays a servant to white men to boot—which is not something Bob Hope had to do.

Remember Moe Howard’s suggestion that Moreland would be a great Stooge if the need arose? The need did just that in 1955, with the death of Shemp Howard. At a time when Moreland could have used the work, the comedy team suddenly had need of someone with brilliant comic timing and plenty of experience. Moreland biographer Michael H. Price talked to Howard about just what a great idea it was:

Mantan was responsive, when Larry (Fine) and I talked the idea over with him. I mean, we’d all seen our better days by that time, but ol’ Moreland, – now there was a talent that could’ a’ invigorated the whole act! He had the word play – you ever heard him do that ‘anticipation’ routine, where he and one or another of his partners finished each other’s sentences? – and he had the physical shtick, the jive moves and double take receptions that would’ a’ filled in the gaps when Jerome (Curly) and Shemp had kept covered.

The studio had other ideas, though, according to Howard:

But of course Columbia (Pictures’ management) demanded a white guy, because they’d apparently been scared off of Mantan, and we ended up with that prissy damned Joe Besser, who was whatcha might call a pain…I’ve always thought what a great act the Stooges could’ a’ stayed for a while, if only we’d’ a’ gone with Mantan.

And that was the end of that. Having appeared in over 300 movies in his career, Moreland then only worked sporadically in the industry until his death in 1973 from cerebral brain hemorrhage. His last featured role was as a doomed delivery man in 1964’s weirdly wonderful comedy-horror film Spider Baby, and though the role was small, in true Mantan Moreland fashion, it is not easily forgettable. He played a few more blink-and-you’ll-miss-them roles, wrapping up his film career as a man almost run over by a motorcycle in the soft-core film The Young Nurses (1973). Moreland made a few TV appearances on shows like “Adam 12” and “Love, American Style” and released a few raunchy “party records” on the Laff label, including That Ain’t My Finger (his “mashed potatoes” punchline famously appears in the Beastie Boys song “B-Boys Makin’ With the Freak Freak”).

One thing Moreland never stopped doing was the indefinite talk routine that originally made him famous, performing it up until the last year of his life. Mel Watkins, a black comedy historian, noted that to black audiences, it was as well-known a classic as “Who’s on First?” was to white audiences. Once so famous that his films bore his real-life name (Mantan Runs for Mayor and Mantan Messes Up, 1946), the actor is certainly not a household name today. While he deserves rediscovery, one thing’s for sure: if Columbia Pictures hadn’t been opposed to having a black comedian in one of the most beloved comedy groups of all time, he wouldn’t have needed to be rediscovered at all, and his name would have been sealed in mainstream comedy history.