This Day in History: October 7th- A Historic Union 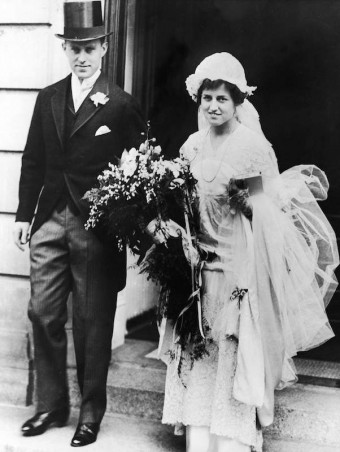 On Oct. 7, 1914, a wedding took place in Boston, MA that would change the course of American history. The couple would have nine children – philanthropists, congressmen, senators, war heroes, and a United States president. Yet the family they created would endure great sorrow in spite of their exalted status.

Rose Elizabeth Fitzgerald was born on July 22, 1895. She was the daughter of John F. (“Honey Fitz”) Fitzgerald, who served as a congressman and Boston’s mayor. Fitzgerald was a politician of the larger-than-life and ethically questionable variety. He took his charming daughter “Rosie” campaigning and she showed an immediate knack and liking for political glad-handing. Rose knew it was the life for her.

Joseph Patrick Kennedy was born on September 6, 1888, in Boston. His father, Patrick Kennedy, was the son of an Irish immigrant tenant farmer. Patrick clawed his way up from the working class to become an influential politician and businessman. He made certain his son Joe attended Boston Latin School and Harvard University, once off-limits to the Irish. What Joe didn’t have in a GPA he more than made up for in charm, and he was already a very successful businessman by his early 20s.

Joe Kennedy and Rose Fitzgerald first met at Old Orchard Beach, Maine as teenagers when their families were vacationing. They met again during Joe’s years at Harvard when he began seriously courting the ex-mayor’s daughter.

Kennedy had to work hard to win his bride. The Fitzgeralds were in a higher social echelon than the saloon-keeping Kennedys, and Honey Fitz knew it. He went out of his way to discourage the match, sending Rose to school in Prussia for a year (out of sight, out of mind?) but to no avail.  After a very lengthy courtship, they were finally married on October 7, 1914.

Cardinal O’Connell conducted the ceremony in his private chapel, a privilege reserved for the most elite Boston Catholics. It was yet another feather in Joe Kennedy’s cap. “I always wanted to be married by a cardinal and I was.”

The newlyweds set up housekeeping after a two-week honeymoon in Virginia, and then Rose’s years of prodigious childbearing began. Between 1915 and 1932, she presented Joe with nine children – four boys and five girls. She was a hyper-organized if not an overly affectionate mother, hammering her guiding principles of “self-improvement, discipline, responsibility” – along with a hefty dose of conservative Catholicism – into all her children’s heads.

Reportedly Joe had very little to do with his children’s day-to-day upbringing unless it had to do with his sons’ educations. In fact, he was very rarely home, as business matters kept him constantly on the go. His numerous extramarital affairs, the most celebrated with movie siren Gloria Swanson, also took away from his home life.

Rose tolerated Joe’s philandering with extreme forbearance. She even invited Swanson to stay at the Kennedy home, giving no indication that she was aware of any impropriety. She buried herself in her church and in her children. As she later stated, “I looked on child rearing not only as a work of love and a duty, but as a profession that was fully as interesting and challenging as any honorable profession in the world and one that demanded the best I could bring to it…”

Despite the occasional dalliances outside of their marriage on Joe’s part, the couple considered their greatest achievement to be the family they created together. But despite all the success of certain of their children, they endured many tragedies as parents. Their son Joe was killed in action in WWII and daughter Kathleen was killed in an airplane crash not long after. John was assassinated during his presidency in 1963, and Bobby was also gunned down seeking the Democratic nomination in 1968.

Joining in the tragedy, and perhaps even more regrettable as it was more or less caused by his own hand, Joe had his daughter, Rose, lobotomized at the recommendation of his physician. While the surgery did make her docile, as was intended, it resulted in her being unable to speak, walk, or communicate really at all. It also rendered her incontinent and significantly diminished her previous, already low, mental capacity. (She was much later in life able to recover some motor skills, such as the ability to walk with the help of a walker). Needless to say, Joe Kennedy was crushed.  The “revolutionary” procedure that was supposed to help his daughter ultimately left her, for all intents and purposes, completely incapacitated. (For more on this, see: The Tragic Life of JFK’s Sister)

Joe died in 1969. Rose lived on another 25 years, the matriarch of an ever-growing brood of Kennedys, who still seemed destined for tragedy into the next generation. But Rose, as always, remained stoic and resolute in her faith in God. She died in 1995 at the remarkable age of 104 at the family compound in Hyannisport, MA, leaving behind her (at the time) 5 surviving children, 26 grandchildren, and 42 great-grandchildren.