What’s Another Word for Thesaurus? 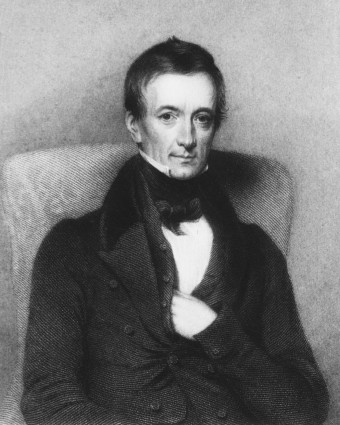 Once there was a man, a biographer noted, “more interested in words than people.” That turned out to be a great thing for BRI writers and other wordsmiths. It gave us a book that is of great use, utility, value, help, worth, and functionality.

Peter Mark Roget (1779-1869) was an unusual kid. In our time he would probably be diagnosed with obsessive-compulsive disorder or perhaps classified as having high-functioning Asperger’s syndrome, and if he’d been born in the twenty-first century, professional help could have been sought. But in the late eighteenth century, the London-born son of a clergyman had to find his own way to cope: He obsessively counted things and made lists. He recorded, for example, the total number of stair steps he climbed up each day, and kept a separate count of the steps he went down. Before age 8, he had already filled notebooks with lists of words grouped by categories: for example, all the animals he could think of, all the parts of the body, and even “Things Found in the Garden.”

The young Roget was phobic about dirt and easily upset by a world he saw as random, messy, unpredictable, and disorderly. Worse, some of his loved ones were more than a little dysfunctional, filling his life with instability, insanity, and tragedy. His grandmother was a lifelong depressive and possibly a schizophrenic. His mother became psychotic after his father died. His sister suffered from depression and nervous breakdowns. But perhaps the worst experience of Roget’s young life was having a grieving uncle slash his own throat and bleed to death right in the middle of a conversation they were having.

In the midst of such horror, Roget’s ritualistic sorting practices must have calmed him and given him a sense of order, helping him to stay functional while those around him were not. In fact, young Roget managed to keep it all so well in check that he was invited to study medicine and classics at Edinburgh University when he was 14 years old.

Roget earned his MD from Edinburgh in 1798. He was nineteen at the time, and perhaps it was this youthfulness that caused him to drift a bit. He hung out with scientific luminaries including Charles Darwin’s grandfather, Erasmus (the young Roget found the elder Darwin to be fat and sloppy). He worked for a while with Jeremy Bentham, inventor of the “frigidarium” (a device for keeping food cool and fresh), but was reportedly appalled by the “filthiness of his equipment.” He moved on to participate as a subject in experiments with nitrous oxide, but, Roget being Roget, he took the whole thing too seriously: After his first laughing gas exposure, he wrote that while others were laughing and acting giddy, “I experienced no pleasurable sensations of any kind.”

After six weeks working on ways to repurpose London’s sewage (we have no idea what he had in mind), Roget spent two years as a tutor and guide for a pair of wealthy young gentlemen doing their “Grand Tour” of Europe (Paris:dirty, Napoleon’s soldiers: pleasingly precise). At the ripe old age of 25, Roget was made a physician at the Manchester Royal Infirmary. He settled into a career and went to work introducing much-needed public-health reforms.

When Roget arrived in Manchester in 1804, the city’s streets literally swam with garbage. “The town is horrible,” he wrote, “dirty and black… the air always heavy by the smoke of the factories.” Roget found the city so filthy and disorderly that he refused to go out for trivial reasons and spent most evenings and off-days indoors, tinkering and… making lists.

While peering through the window blinds one day, Roget noticed something odd: The spokes of a cart’s spinning wheels looked curved as they passed by. Roget ran outside and asked the cart driver to go back and forth in front of his home so he could study the effect. He decided that this optical illusion was due to what he called “the persistence of vision.” In simpler words, the eye’s retina sees movement not as a continuous flow but as a series of split-second still images that it projects to the brain, which interprets them as movement. This discovery led, in time, to the magic of movies. (More than a century later, movie executive Will H. Hays would credit Roget as being one of the fathers of the motion picture.)

Roget’s biggest breakthrough, however, was inventing the “log-log scale” for slide rules. Adding a sliding piece of wood with precise numbers along its edges to the basic ruler allowed engineers, architects, and mathematicians to do certain complicated computations without spending hours working them out on paper.

Dr. Roget was also something of a joiner: He was a Fellow of the Royal Society (made up of the world’s most distinguished scientists), and a member of the Zoological Society of London, the Geological Society, and the Medical and Chirurgical (surgical) Society, among others. Despite his comfort with groups, he was less comfortable working one-on-one. His bedside manner was awkward at best, so he spent much of his career as a researcher and lecturer (and kept making lists after list of words).

In 1840, Roget retired from medicine. He was 61 years old and could have justly rested on his laurels and gone down in history as a scientific footnote for his contributions to the slide rule and motion pictures. But a book by another compulsive list maker sent him back to his lists with a vengeance.

Not a Listless Retirement

Enter the competition: Hester Lynch Piozzi. Piozzi had been interested in words and their usage all her life. In 1794 she wrote a guidebook of synonyms, titled (in the long-winded style of the time) British Synonymy; or, An Attempt at Regulating the Choice of Words in Familiar Conversation. Twenty-four years after her death, a publisher reprinted the volume and Roget got his hands on a copy.

He was appalled. To Roget, Piozzi’s lists were not only haphazard, they were based on a faulty premise: that words could actually be synonymous. He believed that no two words were ever truly synonyms- each word had subtle difference in meaning and connotation. He also believed that the best word guide would provide a system of “verbal classification.”

He dug up the lists of words organized by categories he’d started as a young doctor and set to work with new vigor, refining his categories and subcategories, carefully fitting each word into its proper place. For example, in the very long category of “Individual Volition,” he included a subcategory called “Cleanness” that starts with words related to perfection (“untainted, like a cat in pattens”), and then tackles words related to extreme uncleanness (“rotten as cheese, crapulous”). Roget’s way of classifying words would allow a wordsmith to pick just the right word to use when comparing, say, a well-maintained restaurant kitchen (“hygienic”) with a teenager’s bedroom (“foul”).

At age 73, Roget brought to his publisher a book that separated words into 1,000 categories and sorted them by class, division, and section (similar to the way natural historians sort animal species by phylum, class, and order). He saw it as a kind of “reverse dictionary” that would enable someone to find the word by which “an idea may be most fitly and aptly expressed.”

It was an invaluable resource with one big problem: While Roget’s method of organizing was brilliant (and fun to browse) it was extremely difficult to use as a reference tool. Luckily, his publisher convinced him to add an index, changing the book from an exhaustively fascinating oddity to a genuinely useful reference tool. It became a true thesaurus, which Roget would have been quick to point out meant “treasury” and not, as most people believe, “a list of synonyms.”

Published in 1852, Roget’s book had a wordily worthy title: Thesaurus of English Words and Phrases, Classified and Arranged So As To Facilitate the Expression of Ideas and Assist in Literary Composition. It was a huge hit with the British public. A “bowdlerized” American edition (they took out the vulgar bits) came out two years later. Roget continued correcting and adding to subsequent editions until his death at age 90, and his heirs continued the task for another century by which time the name Roget’s became so generic it was (sorry Mr. R.) synonymous with the word thesaurus.