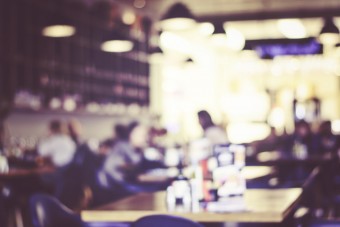 Unknown to most, thousands of times each day we momentarily lose sight of the world around us. Known as saccadic masking, it is a function of the brain protecting us from suffering through blurred images that would otherwise be produced when our eyes move or shift.

A saccade is a rapid eye movement between the places where the eye rests (called fixation points). When scanning a scene, we don’t actually see everything in a continuous, smooth stream; rather, although we are unaware of the phenomenon, we actually view it as a series of discrete images (when the eye pauses at fixation points), each separated by a period of blindness (during the saccade) when the eye moves.

Interestingly, although for the most part saccades result in momentary blindness, there are ways they can be used to produce a clear image not otherwise attainable. For example, when in a moving vehicle if the eye movement can be timed to match the vehicle’s speed, objects that initially were blurry (think of trying to focus on the track while riding in a moving train) will appear distinctly. Similarly, you can focus on and track a single blade of a ceiling fan as it spins around if it isn’t moving too fast. Of course, since this phenomenon requires a saccade, the clear view will only last a moment.

In fact, saccades only last between 20 milliseconds (ms) and 100 ms, and the speeds of those movements can range anywhere from 10 degrees per second (deg/sec) to 300 deg/sec; notably, a saccade’s velocity is positively correlated with the size of its movement (the bigger the saccade the faster it occurs).

Note, too, that saccades are notoriously inaccurate, so after an eye movement, frequently there is a very short delay, then a smaller saccade occurs to bring the eye closer to its new target (called a corrective saccade).

In addition, our eyes experience another type of saccade nearly all of the time when we focus on objects. Called microsaccades, these involuntary, tiny eye movements actually help us see more clearly by controlling the fixation position and reducing any fading that would otherwise occur with perception. Microsaccades occur at a rate of 1-2 per second.

While all of these saccades have evolved with us over the millennia to help protect us from blurry images and keep our sight accurate, they have yet to catch up with the modern, motorized world. Remember that the accuracy of our sight diminishes greatly the further an object is away from our direct sightline; so that, while objects viewed directly by the center of the eye (fovea) are seen with great detail, those seen with peripheral vision are indistinct at best.

As such, in order to see clearly, we typically shift our eyes in the direction of the object, which of course causes a saccade, and its period of temporary blindness. While à pied, this poses few problems, when hurtling down the roadway at 45 mph, the period of poor, peripheral sight, combined with saccadic masking, can result in even the most conscientious driver overlooking an object – or a person. This is a particular problem when it comes to smaller objects, and may help explain why so many bicyclists are hit by cars each year. As one cyclist blog explained: “a thin slice of cyclist, moving slowly in relation to the background and other vehicles, doesn’t stand out in a motorist’s peripheral vision and disappears during the masked portion of the eye’s motion.”