This Day in History: April 30- The Cone of Cones 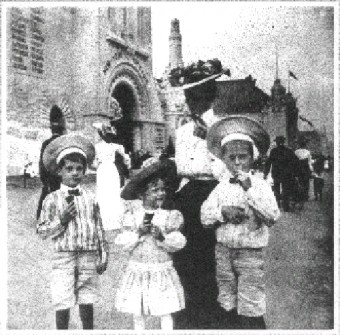 For much of history, eating was a very formal affair and the concept of food you could grab and eat on the go was not terribly common. This all began to change in the 19th century, with the advent of things like hot dogs in a bun and, of course, ice cream in a cone.

There are several people that claim credit for the invention of the ice cream cone, and perhaps many of them were even being honest in thinking they were the first. Like many good ideas whose time had come, it’s very probable the ice cream cone was independently invented in several places over a relatively short period of time.

You see, in the 1870s, Carl von Linde of Germany invented industrial refrigeration. This, along with other technological advances like steam power, motorized vehicles, and electric power, made ice cream that much easier to produce, transport, and store. As such, many ice-creamovations happened in the following decades, one of them being the ice cream cone.

Contrary to popular belief, the ever-popular ice cream cone was not invented at the 1904 World’s Fair.  For instance, a form of ice cream cone is mentioned in the 1888 Mrs. Marshall’s Cookbook and the idea of serving ice cream in cones is thought to have been in place before that.

Despite being previously documented, the first person generally credited with creating the ice cream cone was an Italian immigrant named Italo Marchiony. He claimed he came up with the idea in 1896 to increase the efficiency of his street vending business, and in December of 1903 was granted a patent (U.S. patent No. 746971). However, technically his patent was not for ice-cream cones, but for edible ice-cream cups, which was an important distinction in a subsequent lawsuit he later filed as ice cream cones began becoming popular.

There is another common story that during the 1904 St. Louis World’s Fair, which opened on April 30th and debuted the ice cream cone to a mass audience for the first time, that ex-sailor and Syrian native Ernest A. Hamwi was selling waffles next to Charles Menches’ ice cream stand. Menches quickly ran out of bowls to serve his wares in. Hamwi then fashioned a cone from the thin, crisp Persian pastries he sold called zalabis and suggested Menches use them as a handy substitute. Menches took him up on his offer, and the ice cream cone was an instant hit with fair goers. In a very short time, there were at least 50 other vendors at the World’s Fair selling “cornucopias.” When it was over, Hamwi founded the Cornucopia Waffle Company.

Whether that’s really how it happened (many ice-cream vendors at that particular World’s Fair claimed to have really been the ones to have invented the ice-cream cone), there were most definitely a lot of vendors at the fair selling ice-cream cones, which subsequently helped popularize the item.