Where Mosquitoes Go During the Daytime

April 23, 2015 Sarah Stone
Piot R. asks: Where do mosquitoes disappear to during the daytime? 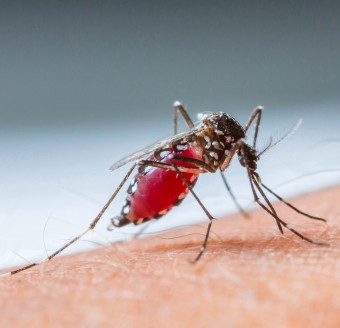 Mosquitoes are the bane of anyone who steps outside during the hours around dusk and dawn. If not caught in time, the creatures take a drink of blood, and then leave behind an itchy bump, and maybe a disease or two. But very rarely do the insects come out for a meal during daylight hours unless the sky is cloudy. So where do mosquitoes go during the daytime?

First things first, the only mosquitoes that consume blood are female. Also, your blood does not provide them with anything they need nutritionally for their own health. Rather, they consume the blood of humans and other animals as a way to get certain nutrients needed for the proper development of their eggs. Yes, your blood is being used to make more mosquitoes.

Once the female has safely acquired a “blood meal,” she will rest for a few days while her body develops the eggs from digesting the proteins and iron in the blood, producing amino acids which are used as the building blocks for the synthesis of the egg yolk proteins.

Though people are often bitten, most female mosquitoes actually prefer to feed on livestock and small mammals if given the choice. Male mosquitoes have no need for this sort of thing, so they do not indulge in the highly risky behavior that is sucking the blood of larger animals. If you’re curious as to what mosquitoes actually eat for their own nutritional needs, both male and female mosquitoes primarily feed on nectar from plants, much like honeybees, who incidentally seem to know the world is round and can even do some remarkably complex math in their heads.

The majority of mosquitoes feed around evening and at dawn. The dry heat that often occurs during daylight hours in the summer can quickly kill mosquitoes by causing them to become dehydrated. As such, most mosquitoes rest or sleep in a dark, sheltered place during the daylight hours, preferably an area that is relatively humid, such as tucked inside vegetation like plants and grass. They also can be found sleeping the day away inside man made structures like culverts or barns, or natural shelters such as caves, holes in the ground, and holes in trees.