This Day in History: November 25th- The Accidental Sinking of a Floating Bridge 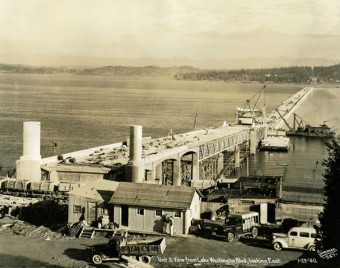 On November 25, 1990, the Lacey V. Murrow Memorial Bridge broke into pieces and sank to the bottom of Lake Washington. After a week-long windswept rainstorm, the old bridge succumbed to the forces of nature and gradually disappeared beneath relentless waves. Since the bridge’s demise was a gradual process, the local media could gather at the scene, allowing everyone enjoying their Thanksgiving holiday weekend to follow along at home. One witness said, “It looked like a big old battleship that had been hit by enemy fire and was sinking into the briny deep.” He added, “It was awesome!” Luckily, no-one was hurt.

When the bridge opened for business on July 2, 1940, Washington Governor Clarence Martin described it as “original, distinctive, striking and graceful — a product of this great state’s vision and constructive spirit.” The floating bridge, originally called the Lake Washington Floating Bridge or the Mercer Island Bridge, was considered a marvel of engineering. It was also the “biggest thing afloat”, easily dwarfing the ocean liner the Queen Elizabeth; its closest competition.

By November 1990, the Lacey V. Murrow Memorial Bridge (renamed in 1967 after Washington’s highway director) was in need of repairs after 50 years of service. (A twin span had been built parallel to it to accommodate the thousands of commuters who used it daily.) During construction, workers had cut holes into the hollow concrete pontoons on the old bridge and failed to close them up before the long holiday weekend. When a heavy storm hit, the pontoons filled up with water and submerged under the surface.

This, of course, was not a happy situation, and last-ditch efforts were made to pump out the pontoons, but it was much too late. By that point, news helicopters were circling overhead as the bridge began to creak and sag. As the morning turned to afternoon, portions of the bridge broke off and disappeared under the water. Finally, the last pieces upended, tilted, and then slid to the bottom of Lake Washington. If you listened closely, Celine Dion was warbling a dramatic ballad somewhere off in the distance.