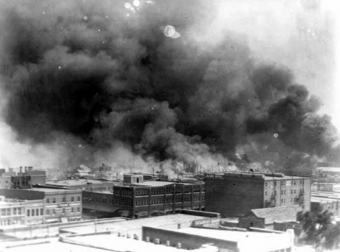 The Greenwood suburb of Tulsa, Oklahoma disappeared overnight during the summer of 1921. Known as the “Black Wall Street,” due to being one of the wealthiest black communities in the United States at the time, Greenwood thrived as the home of Tulsa’s large African American community. But the arrest of a young African American man accused of attempting to rape a white woman sparked a race riot that left hundreds dead and destroyed most of Greenwood. Yet the Tulsa Race Riot has been largely forgotten by history despite the massive destruction and relatively large death and injury tolls.

The city of Tulsa, Oklahoma changed after the discovery of an oil field in 1905. A city of 10,000 people in 1910 boomed to a population of over 100,000 by the summer of 1921. Downtown Tulsa offered residents their pick of jewelry and furniture stores, pawn shops, movie theaters, and even speakeasies. Segregation prevented the African Americans from enjoying Downtown Tulsa, so Greenwood thrived by serving all of the needs of the community; it even had its own hospital. It was also home to several prominent and wealthy African American entrepreneurs. There was a reason it was known as “the Black Wall Street.”

Tulsa’s massive growth over a short period of time led to problems with crime and vigilantism. For instance, in August 1920, a white taxi driver was shot when three individuals attempted to steal his cab. A young white man named Roy Belton was arrested and supposedly confessed to the crime after initially denying that he was involved. On August 28th, the taxi driver died in the hospital and a mob of white Tulsans arrived at the courthouse where Belton was being held to demand the sheriff hand Belton over to them. He did so and the mob took Belton out of town and lynched him without any interference from the Tulsa Police Department. In fact, the police actively kept gawkers away while the lynching was taking place.

While it was white man that was lynched, that incident still rested heavily on the minds of African Americans in the city.  As the editor of one of the local black-owned newspapers, A.J. Smitherman pointed out, if the police wouldn’t stop a white man from being lynched, what hope did a black man who was jailed have?

On May 30, 1921, 19 year old Dick Rowland and 17 year old Sarah Paige  encountered each other in an elevator in the Drexel building on Main Street.  Sarah was working there as an elevator operator. As to why Rowland was there, it is thought he came to use the bathroom on the top floor.  Normally it was a bathroom only for whites, but Rowland had special permission to use it as he worked as a shoe-shiner nearby. Given this was the only elevator in the building, Sarah was a frequent operator of it, and Rowland was known to have used this bathroom before, it is generally thought the two, at the least, knew each other.

The exact nature of what happened while the pair was on the elevator is debated to this day, with the most widely accepted version of events being that Rowland accidentally stepped on the toes of elevator operator Sarah Paige or tripped and grabbed her to catch his fall. It has also been speculated that the two may have had a secret relationship and simply had a fight that day.

Whatever the case, at some point she screamed, or at least yelled, loud enough that the clerk in the store downstairs believed that Rowland had attempted to rape Paige. The clerk called the police, and they arrested Rowland the next morning in Greenwood. Only the clerk’s testimony remains in the case; Sarah Paige’s has been lost in the years since. However, it is thought given the police’s low-key and slow reaction after interviewing Paige, and that we know she chose not to press charges, that the incident in question was probably not anything serious.

After Rowland was brought in, a newspaper article and then an editorial published shortly after the arrest put the idea of a lynching into the public’s mind (with the titles of the articles reportedly “Nab Negro for Attacking Girl In an Elevator” and “To Lynch Negro Tonight,” though copies of the paper have been lost to history and the microfilm of that edition is curiously missing the pages containing those articles).

As the paper said, on the night of May 31st, a crowd gathered around the courthouse where the Tulsa Police Department were housing Rowland. The new police chief, William McCullough, was eager to avoid another lynching like had taken place under the watch of his predecessor, so had moved Rowland to the top floor of the Tulsa County Courthouse to keep him safe from vigilantes. He then had the elevators disabled and positioned armed officers at the stairwells and the roof to prevent anyone coming up.

Around 9:00 PM, a number of African American veterans from World War I arrived at the courthouse and offered to help the police department protect Rowland from the mob. They left after the police declined their offer, but their presence riled up the crowd around the courthouse. That crowd of an estimated 1,000 people nearly doubled in size over the course of the next half an hour; this time with many coming armed after hearing that an armed group of African Americans were setting themselves up at the courthouse.

A second, larger group of seventy-five African American men arrived at the courthouse later on in the night after rumors circulated that the mob was arming themselves and planning to storm the building. These men were also armed and again they offered to help the police keep Rowland safe. There offer was turned down again.

At this point, a confrontation occurred between one of the black World War I veterans and a white man in the crowd. The white man demanded that the veteran turn over his service revolver. The two men struggled for the gun, and it went off. The gunshot pushed the mob over the edge to attack the group of African American men.

The two groups exchanged fire for a few seconds, but massively outnumbered, the black men rapidly retreated toward Greenwood, with the mob in hot pursuit. Gunfights, looting, and arson all took place in Greenwood. Leftover WWI biplanes were also reported by many witnesses to have fired upon and dropped explosives onto Greenwood, though the police claimed these were only dispatched to get a better view of what was going on in the “Negro uprising.”

I did not take time to get a hat for myself or Baby, but started out north on Greenwood, running amidst showers of bullets from the machine gun located in the granary and from men who were quickly surrounding the district. Seeing that they were fighting at a disadvantage, our men had taken shelter in the buildings and in other places out of sight of the enemy.

Thousands of African Americans, most not involved in the riots, were rounded up and kept in “protective” custody at places like the local baseball stadium for up to a week before being released. For most, when they were finally let out, they found they no longer had homes in Greenwood.

Nearly every one of the thirty-five blocks that made up Greenwood had been burned to the ground. Homes and business alike were destroyed, with the generally accepted tally being 1,256 places of residence along with 191 businesses being destroyed and another 215 homes looted, leaving about 10,000 black people homeless.

The death toll reports ranged from 55 to 300 dead. Because a large number of African Americans were buried in unmarked or mass graves, the exact total today isn’t known. It is known that approximately 800 people were admitted for injuries to the local white hospitals, most thought to have been white as blacks would likely not have been allowed. As the black hospital had been destroyed, no information on the injuries to the black population are known.

For what it’s worth, a local Red Cross worker, Maurice Willows, reported that at least 300 black people had been killed. He also reported there was a rush to bury the bodies to hide the numbers. As many black people fled the area completely after, determining who was missing and who was dead in the immediate aftermath was nearly impossible. Soon after, there was also a concerted effort to hide the fact that anything had happened at all.

The Tulsa Race Riot and the destruction it caused simply wasn’t talked about for several decades. Reporters and academics were threatened when they tried to publish interviews with riot survivors. The riot was a taboo subject until a commission formed by the state of Oklahoma in 1997 wrote a report recommending reparations be paid to any remaining survivors and their descendants.

As for Dick Rowland, he was kept safe in the county jail until the rioting was over, at which point he was set free.  Needless to say, he immediately moved away from Tulsa and never returned.