Why the Bellies of Starving Babies Swell

September 25, 2014 Melissa
Jane R. asks: In photos of starving children and babies, their stomachs often seem to be swelled up. What causes this? 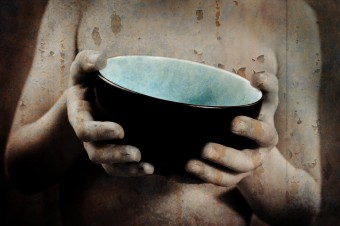 Of all the tragic, indelible images that come from places of famine, none is more troubling than the iconic photograph of a painfully thin child with an enormous, distended belly. The result of several factors relating to malnutrition, that swollen belly is just one of the many outward signs of a very serious disease known as kwashiorkor.

Although the distended abdomen is perhaps the most recognized sign of kwashiorkor, other symptoms are more common. They include swelling of the feet and ankles (pitting edema), tooth loss, thinning hair, loss of pigmentation in the skin, loss of appetite, irritability, loss of muscle mass and dermatitis. Internally, many even suffer from an enlarged, fatty liver.

The swollen belly is the result of not only that enlarged liver, but also the loss of muscle mass, which leads to weak abdominal muscles. Together with a weakened lymphatic system that is unable to keep up with the body’s liquid wastes, when those wastes accumulate in the abdomen, the belly becomes distended.

Untreated, a child may suffer shock, slip into a coma and die.

Historically, it has been thought that kwashiorkor was caused by a deficiency of protein in the diet, which caused an imbalance in the gastro-intestinal system (which would explain the water retention).

While this is still the prevailing view, others have challenged it by pointing to research in Uganda that showed no difference in the amount of protein in the diets of those who had kwashiorkor and those who didn’t. Some claim that the disease is caused by metabolic changes (themselves caused by physiological stress) that lead to the depletion of certain antioxidants, although studies could not prove this.

Others believe that kwashiorkor is the result of a perfect storm of deleterious factors including insufficient vital nutrients (like vitamins A & E, protein, fat, zinc and selenium) and the presence of aflatoxin (caused by toxic mold) and disease, with these latter two causing an increase in free radicals (that negatively react with cells in the body and cause damage).

Each of these theories makes sense since those most likely to develop kwashiorkor are children who live in extreme poverty where overcrowding and outbreaks of disease are common. In addition, other risk factors include unhygienic living conditions and food storage (where mold develops), and the presence of diarrhea, dehydration, starvation and serious diseases like HIV and TB.

Often, treatment begins with hydration, the treatment of infections and de-worming.

Next, although protein is a key part of treating kwashiorkor, too much too soon can be fatal. Because sufferers have weakened livers, too much protein will overwhelm this organ and cause it to fail. One solution is to wean the child with ever increasing doses of milk products, until she is able to handle the recommended 9%-15% protein diet (of the recommended 350-500 kJ/kg per day).

Notably, some children quickly develop lactose intolerance, although soy milk appears to be an adequate substitute. Vitamin and mineral supplements, including iron, are commonly provided.

Early treatment of kwashiorkor has high success, although many children who do not receive help in time die from the disease (in 2004, 820 deaths were reported in South Africa from kwashiorkor). In addition, many children who recover never regain normal growth rates, and in the very young (under 7 months) they may also have mental impairment.