Why Do We Yawn?

August 4, 2014 Melissa
David G. asks: Why do people yawn? Do other animals do this too? 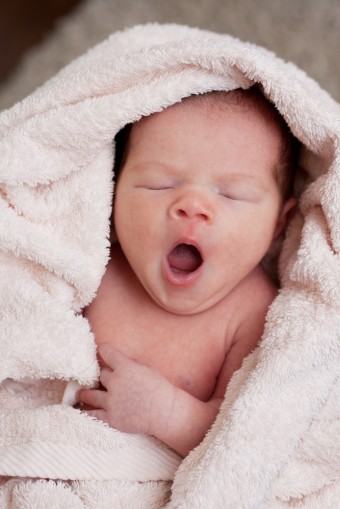 Babies, dogs, cats, birds, mice, rats and even snakes yawn, and some of us were even doing it in the womb. Although for thousands of years the reason has remained elusive, recent scholarship may have uncovered the truth as to why we yawn.

When a person yawns, the stretching of powerful jaw muscles increases blood flow in the head, neck and face and also sends cerebrospinal fluid downward, away from the brain.

Likewise, during a yawn the walls of the sinuses flex, and when combined with the wide opening of your gaping maw, together they draw large quantities of air in through the nasal cavities, mouth and sinus passages.

There are three main theories as to why people yawn.

Because it draws in large quantities of air, many people have reasonably theorized that yawning’s purpose is to draw in more oxygen and exhale CO2; this tenet of conventional wisdom, however, has absolutely no objective evidence to support it.

In fact, in a 1987 study it was shown that yawning neither increased nor decreased when oxygen and carbon dioxide levels were increased. This has caused some scientists to conclude that yawning has nothing to do with oxygenating the blood.

Yawning stimulates and aids in arousal.

It has been noted that, across species, yawning appears to happen “in anticipation of important events and during behavioral transitions.” That yawning facilitates a heightened state of alertness and awareness is also supported by evidence of yawning accompanying changes in neurotransmitter and endocrine levels.

Recently postulated, the thermoregulatory theory of yawning begins by noting that the brain’s temperature is controlled by three factors: the temperature and rate of blood flow and metabolism. Since yawning increases blood flow, it is not unreasonable to hypothesize that its purpose is to cool the brain.

The theory was first developed in a 2007 study that involved two related experiments. In the first, subjects were instructed to breathe either through their noses or through their mouths and then asked to view videos of others yawning. Those who breathed nasally demonstrated no contagious yawning.

In the second experiment, subjects were asked to alternately place either a warm or cold temperature pack on their foreheads and, again, watch videos of people yawning. A whopping 41% of those who had a warm pack on their heads contagiously yawned, while only 9% of those with a cold pack exhibited contagious yawning. Thus, the researchers concluded that brain cooling played at least a part in yawning.

Three mechanisms are hypothesized for how yawning cools the brain. First, it is known that the brain is “consistently 0.2C higher than that of arterial blood.” Therefore, the theory goes, as blood flow increases, the warmer blood in the brain is pushed out, and cooler blood from below rushes in. Researchers compare this cooling process to a radiator.

The second mechanism also allows for heat exchange, but this time it involves cool air, which is drawn into the mouth, nasal and sinus cavities. As it comes into contact with venous areas that contain warm blood, the air cools the blood and removes the heat when breath is exhaled. This process is similar to refrigeration.

The third mechanism also involves the interaction of cooling air with the sinus system, although this time by encouraging evaporation along the sinus mucosa. This system would be similar to how the body cools using sweat on the surface of the skin.

This theory was tested in 2009 with parakeets, and sure enough, their yawning increased as the ambient temperature increased, but decreased at the highest temperatures “when evaporative cooling mechanisms became more frequent (i.e., panting).” These findings were confirmed in humans in a 2011 study, as well.

Not everyone is buying into the thermoregulatory theory of yawning. Detractors note that yawning cannot cause significant temperature drops, there is a significant delay between the yawn and cooling, and both fetuses and cold-blooded animals yawn.

So Why Are Yawns Contagious?

Popular theories as to why yawning is contagious revolve around mimicry and empathy. These are supported by empirical evidence, such as that gleaned by taking MRIs (magnetic resonance imaging scans) of brains while yawning. In one such study, areas involved with processing emotions (both our own and other people’s) were activated during yawning. This led researchers to conclude that “my capacity to put myself in your shoes . . . is a predictor for my susceptibility to contagiously yawn.” It should be noted, however, that yawning is only contagious in about 60-70% of the population.

One corollary to this theory is that contagious yawning in wild populations (like the parakeets) arises after environmental threats are perceived, leading many to opine that it evolved as a survival mechanism by encouraging the entire group to become more vigilant and, thereby, more attuned to danger.