This Day in History: July 23rd 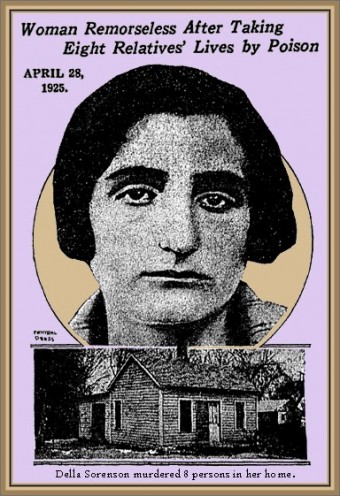 On July 23, 1918, an infant named Viola Cooper died from unexplained causes, and during the next several years there were several more unexplained deaths in Dannebrog, Howard County, Nebraska. Many of the deceased were children, though one was an elderly woman and another was a young man. All of the victims had one thing in common – a tie to a woman named Della Sorenson, a nondescript 25-year-old Nebraska housewife.

Wilhelmina Weldam, Della’s mother-in-law, was her second victim in 1920. A few months later in September, she went after her own immediate family, poisoning her husband Joseph and her daughter Minnie within two weeks of each other.

Only fours months later, the “grieving” wife and mother re-wed. Her former sister-in-law, Mrs. Wetzel Cooper, came for a visit with her four-month-old son, and Della poisoned the poor kid, killing him. Worse still, Cooper came a-calling with yet another child not long after, but thankfully this time the poison didn’t work.

In early 1923, Della murdered her daughter Delia on her first birthday. When a friend came to her house with her baby only a week later, she poisoned that infant too. She tried to bump off husband number two as well, but he survived – then finally the authorities came to the conclusion that maybe something premeditated was going on.

Sorenson wasn’t arrested until 1925 when she attempted to give two children poisoned cookies. She immediately confessed to the crimes, and when she was asked what motivated her to kill these people, including so many babies, she replied that she killed her mother-in-law, Wilhelmina Weldam, because “she was feeble and childish and a burden. I wanted to get her out of the way.” Her first husband, Joseph Weldam, was murdered because they had an argument. She killed her children because of their “crying and fretting.”

Mrs. Wetzel Cooper’s two children were poisoned because she gossiped about Sorenson. “Every time I gave poison to one of Mrs. Cooper’s children, I said to myself, ‘Now I’m going to get even with you (Mrs. Cooper) for what you have said about me,’” Sorenson’s confession read.

She killed her friend Ruth Brock’s infant child “because I felt sorry for the poor child, because its mother did not care for it.”

She also stated in her confession, “I like to attend funerals. I’m happy when someone is dying.”

Because of sentiments such as these, instead of standing trial, Della Sorenson was diagnosed as schizophrenic and committed to the State mental asylum for life in 1925.