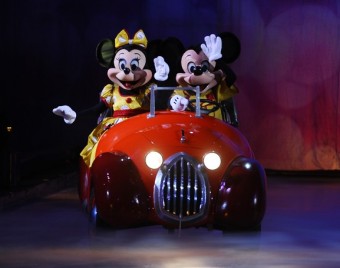 The man who served as the voice of Walt Disney’s iconic Mickey mouse for over 30 years, Wayne Allwine, was married to the woman who voices Minnie Mouse, Russi Taylor.  Who knew, right?  The two were married for nearly two decades until Wayne Allwine passed away in 2009 due to complications from diabetes. He was only 62.  It wasn’t until the announcement of his passing that many in the public began to realize he was married to the woman who voiced his love interest on the big screen.

That said, the husband and wife behind arguably the most-famous cartoon couple in history have appeared on many radio broadcasts together, including the show I host each morning (with that interview during our live broadcast at Walt Disney World, in Orlando).  We were told prior to their arrival that the two would be speaking in character.  (Not exactly easy trying to prep for an interview with mice.)  Yet, the magic of their voices carried the segment, with both sounding as one would expect.  It was fascinating and a little surreal.  Off the air, the Allwines were very pleasant and mostly talked about the production company they owned, Taylor-Allwine Associates.

So how did the two get their jobs and meet? A Southern California native, Allwine first joined Disney in 1966 as a clerk in the mail room.  He later moved to work in the sound production department before landing the gig of Mickey Mouse’s voice, the third person to do so. (Walt Disney was the first voice, but his smoking habit damaged his vocal chords and he eventually stepped away from voice acting.  Sound effects guru, and Allwine’s mentor, British voice actor Jimmy MacDonald was the second person to voice Mickey.) Allwine got the job thanks to an open voice audition after another actor failed to show up. He claimed he simply did his best to conjure up Mickey’s voice from memory. Seems to have worked.

Allwine’s wife, Russi, also known as Rosslyn, has served as the voice of Mickey’s girlfriend, Minnie, since 1986 after she auditioned for the role and got it. She is the longest-running performer for that character today.  Russi has made a living as a voice actress since 1977. Although she is best known for her bashful giggles and bringing Minnie to life, among other roles she also famously voiced Scrooge’s grand-nephews, Huey, Duey & Louie, the identical triplets on the classic animated show Ducktales, as well as Martin Prince, Sherri and Terri (the purple haired twins), and the German exchange student Üter  on The Simpsons.

Details of exactly how the Allwine’s met are unknown, though one can assume they met on the job. Five years after Russi started work as Minnie, the two wed. Russi stated of this,  “Everyone thought it was sweet that we were together, though we kept it quiet for a while.  We kept hearing how cute it was that Mickey and Minnie married.  Yet, we didn’t want it to be about the characters.  It was about Wayne and Russi.”