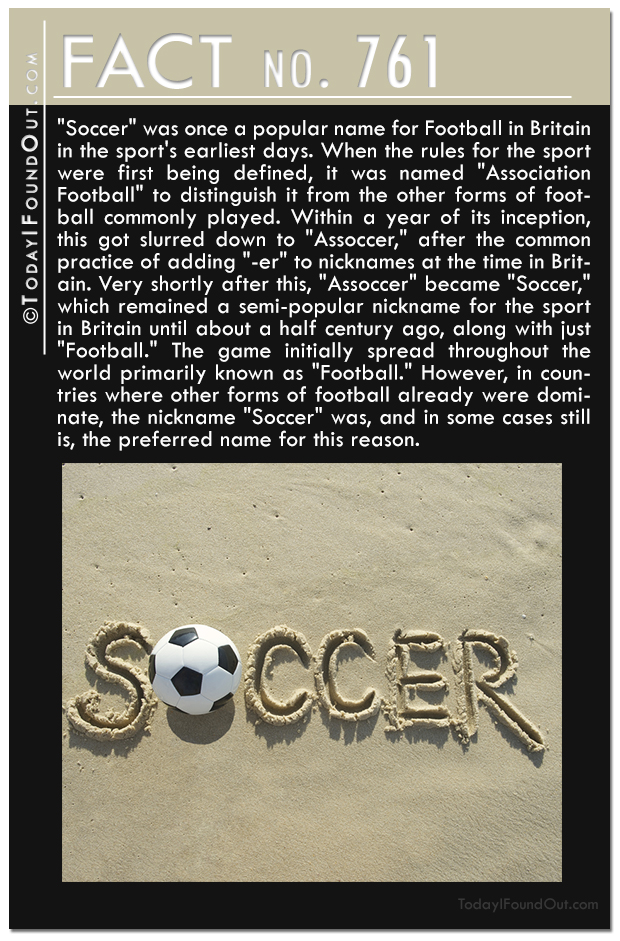 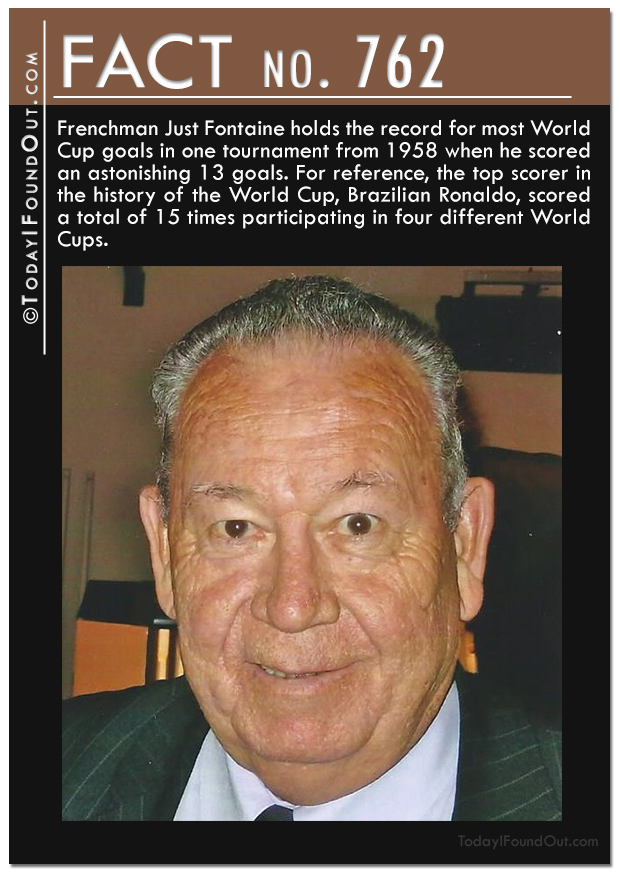 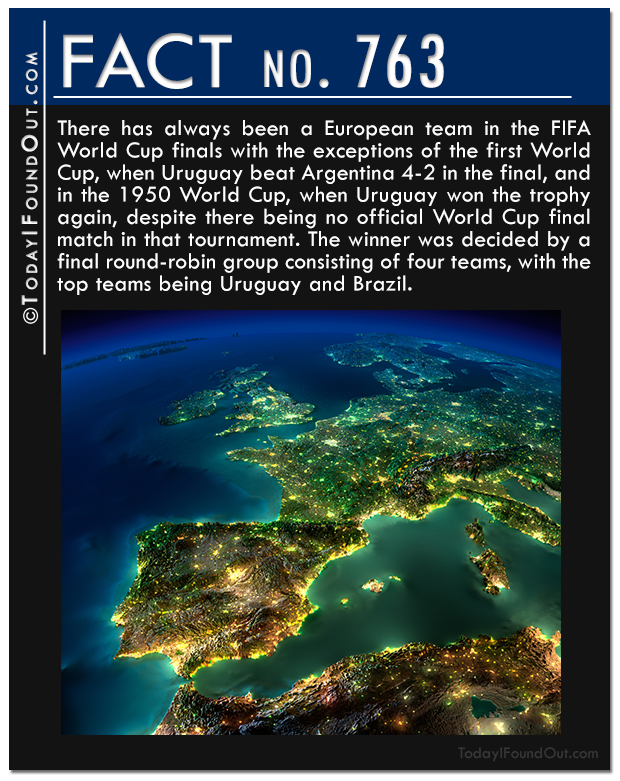 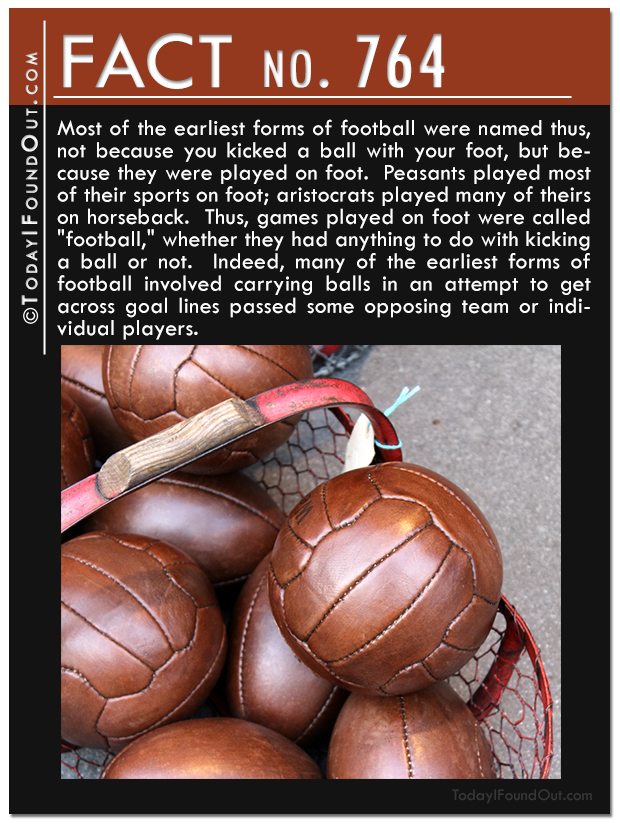 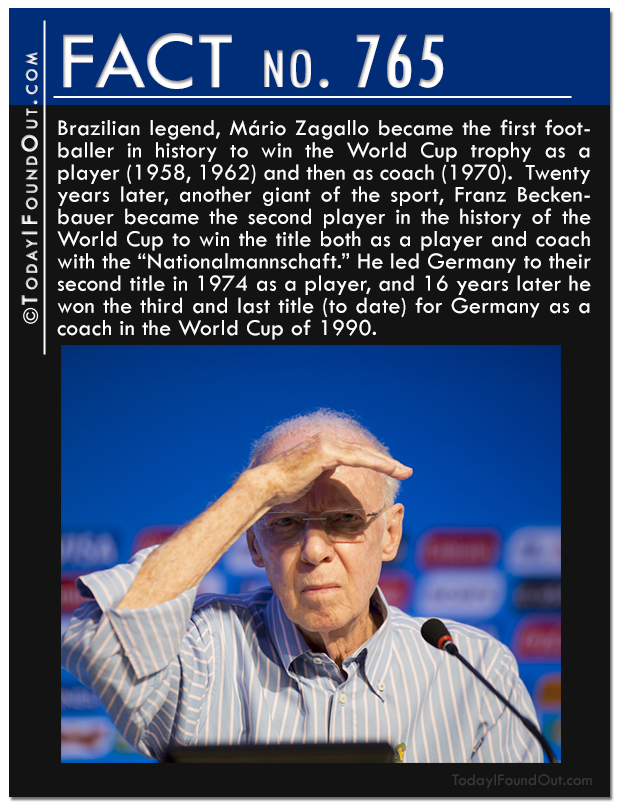 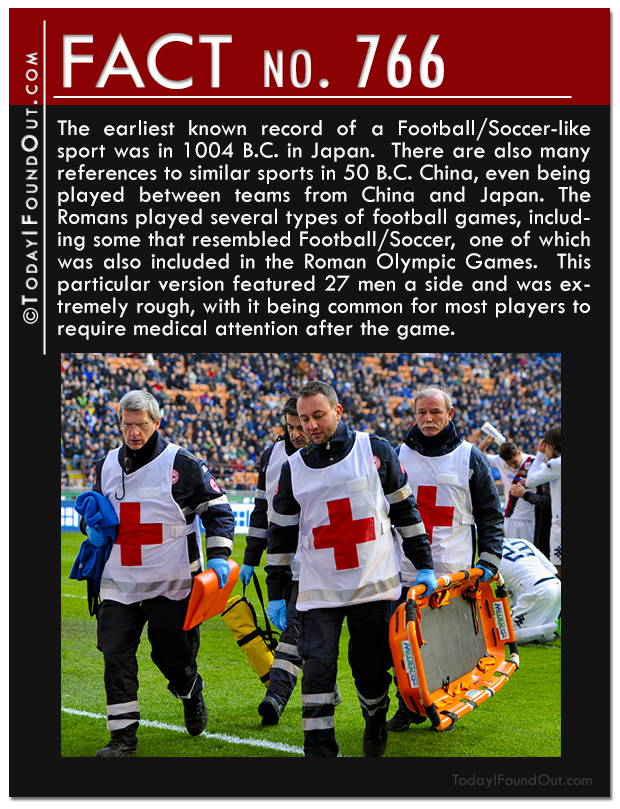 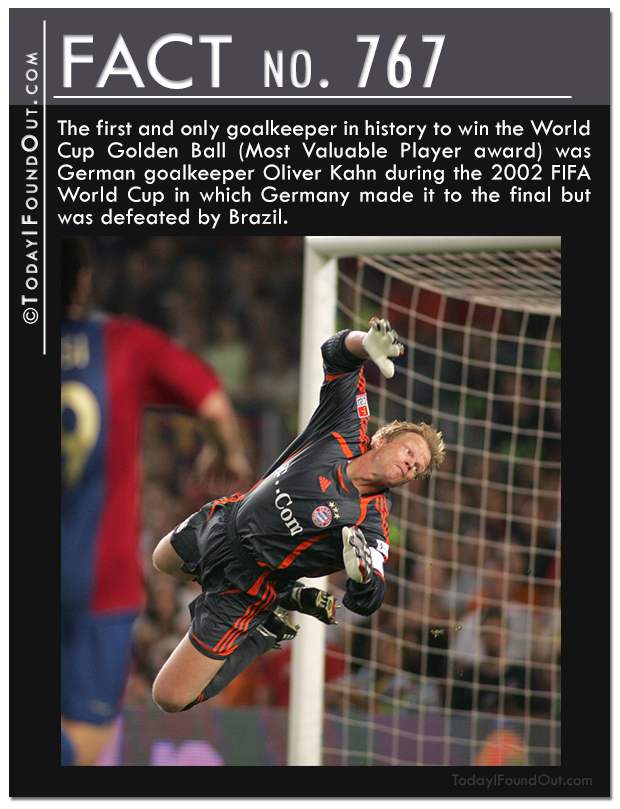 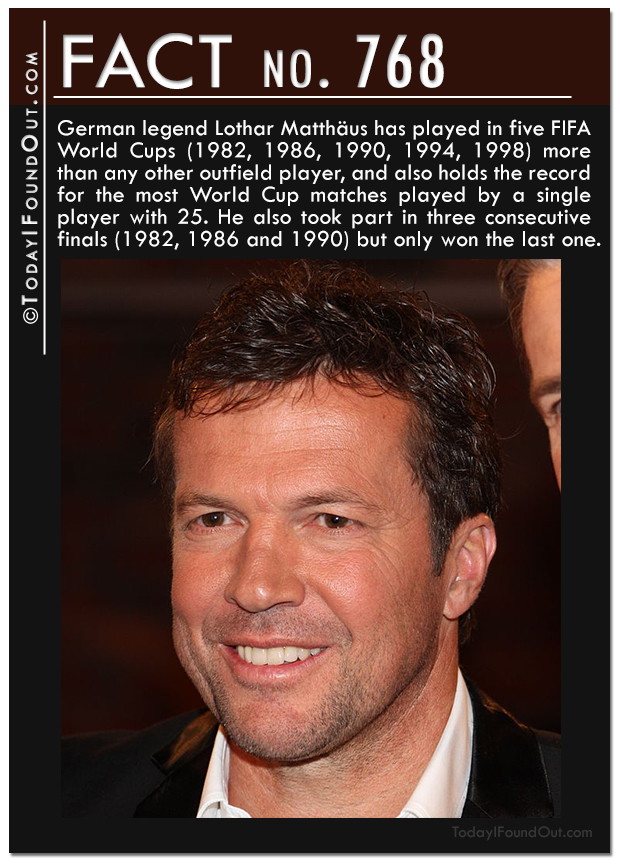 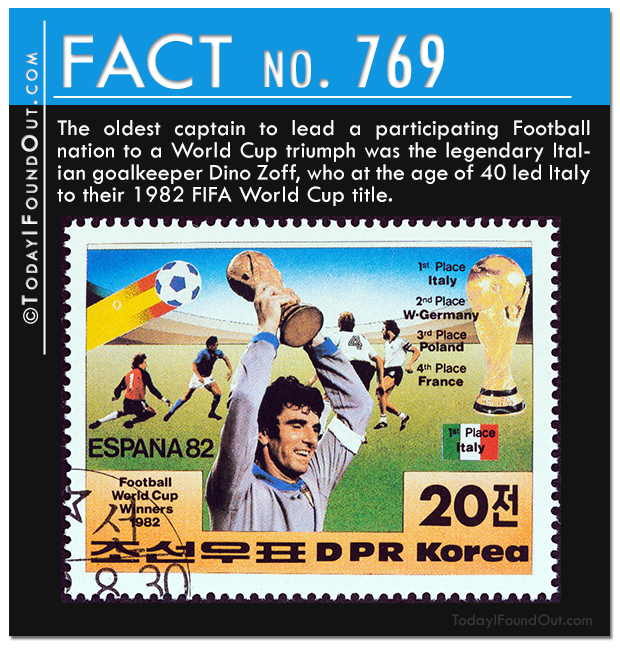 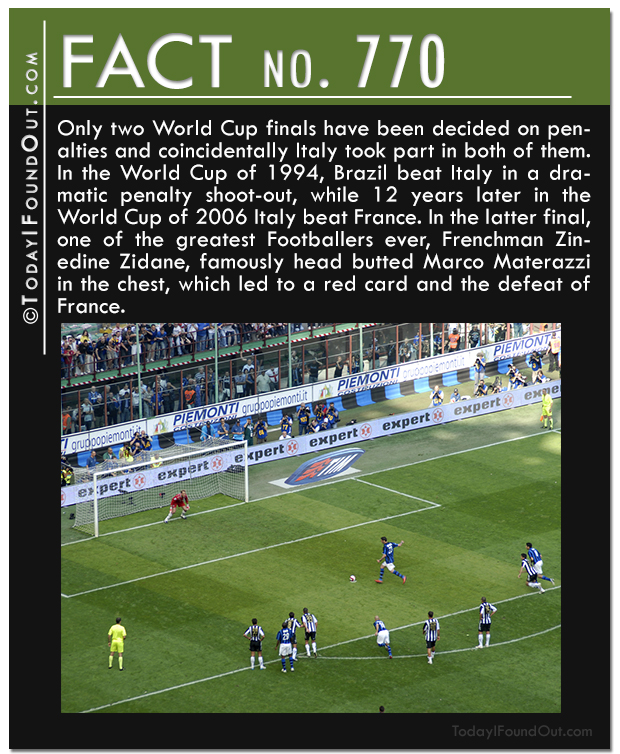 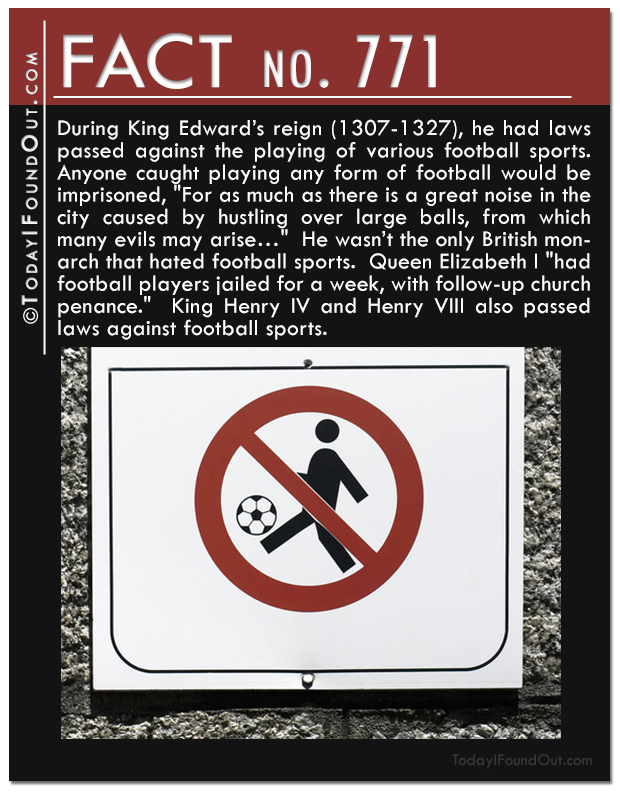 Quick Fact 761: “Soccer” was once a popular name for Football in Britain in the sport’s earliest days. When the rules for the sport were first being defined, it was named “Association Football” to distinguish it from the other forms of football commonly played. Within a year of its inception, this got slurred down to “Assoccer,” after the common practice of adding “-er” to nicknames at the time in Britain. Very shortly after this, “Assoccer” became “Soccer,” which remained a semi-popular nickname for the sport in Britain until about a half century ago, along with just “Football.” The game initially spread throughout the world primarily known as “Football.” However, in countries where other forms of football already were dominate, the nickname “Soccer” was, and in some cases still is, the preferred name for this reason.

Quick Fact 762: Frenchman Just Fontaine holds the record for most World Cup goals in one tournament from 1958 when he scored an astonishing 13 goals. For reference, the top scorer in the history of the World Cup, Brazilian Ronaldo, scored a total of 15 times participating in four different World Cups.

Quick Fact 763: There has always been a European team in the FIFA World Cup finals with the exceptions of the first World Cup, when Uruguay beat Argentina 4-2 in the final, and in the 1950 World Cup, when Uruguay won the trophy again, despite there being no official World Cup final match in that tournament. The winner was decided by a final round-robin group consisting of four teams, with the top teams being Uruguay and Brazil.

Quick Fact 764: Most of the earliest forms of football were named thus, not because you kicked a ball with your foot, but because they were played on foot.  Peasants played most of their sports on foot; aristocrats played many of theirs on horseback.  Thus, games played on foot were called “football,” whether they had anything to do with kicking a ball or not.  Indeed, many of the earliest forms of football involved carrying balls in an attempt to get across goal lines passed some opposing team or individual players.

Quick Fact 766: The earliest known record of a Football/Soccer-like sport was in 1004 B.C. in Japan.  There are also many references to similar sports in 50 B.C. China, even being played between teams from China and Japan. The Romans played several types of football games, including some that resembled Football/Soccer,  one of which was also included in the Roman Olympic Games.  This particular version featured 27 men a side and was extremely rough, with it being common for most players to require medical attention after the game.

Quick Fact 767: The first and only goalkeeper in history to win the World Cup Golden Ball (Most Valuable Player award) was German goalkeeper Oliver Kahn during the 2002 FIFA World Cup in which Germany made it to the final but was defeated by Brazil.

Quick Fact 769: The oldest captain to lead a participating Football nation to a World Cup triumph was the legendary Italian goalkeeper Dino Zoff, who at the age of 40 led Italy to their 1982 FIFA World Cup title.

Quick Fact 770: Only two World Cup finals have been decided on penalties and coincidentally Italy took part in both of them. In the World Cup of 1994, Brazil beat Italy in a dramatic penalty shoot-out, while 12 years later in the World Cup of 2006 Italy beat France. In the latter final, one of the greatest Footballers ever, Frenchman Zinedine Zidane, famously head butted Marco Materazzi in the chest, which led to a red card and the defeat of France.

Quick Fact 771: During King Edward’s reign (1307-1327), he had laws passed against the playing of various football sports.  Anyone caught playing any form of football would be imprisoned, “For as much as there is a great noise in the city caused by hustling over large balls, from which many evils may arise…”  He wasn’t the only British monarch that hated football sports.  Queen Elizabeth I “had football players jailed for a week, with follow-up church penance.”  King Henry IV and Henry VIII also passed laws against football sports.