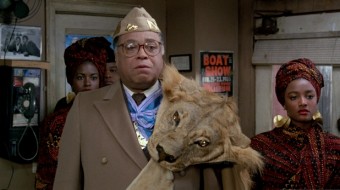 The Lion King is one of those movies you just have to watch; it’s basically Hamlet with lions instead of pretentious English actors, which as an Englishman, I’m fairly certain scientifically makes The Lion King infinity percent better. Coming to America, however, is more of a cult film. It’s a good film don’t get us wrong, but its distinct lack of talking lions and giant talking clouds, which are also shaped like lions, doesn’t give it the same appeal.

However, both films share a common thread, the King and Queen in each film are played by the same actors. Yes, James Earl Jones and Madge Sinclair appear in both movies in virtually the exact same role, sans being anthropomorphic talking lions, though Jones does wear a Lion as you can see from the picture.

So how did that casting come about? Well casting James Earl Jones as Mufasa is a pretty obvious choice. I mean, we’d pay Jones to re-dub The Expendables, if only because that much testosterone, raw sex appeal and audible chocolate in one place would finally complete the ritual to allow us to bring Barry White back to life.  Indeed, Jones was cast due to his voice being powerful and “not dissimilar from an actual lions roar.”

The source for that comes directly from the, The Making Of The Lion King laserdisk, which along with being awesomely lasery, is watchable in the decidedly less-cool format of online streaming via YouTube. Of course, given Disney’s propensity to take down such things particularly after being mentioned on popular websites that brings it to their attention, it may be that the preceding link no longer works for you.  Sorry about that.

But we digress, we watched the video beforehand and Rafiki himself assured us that the voice actors for the film were chosen based on whether or not their voice could inspire the imaginations of the animators.

Oddly, there’s no mention of any more specifics as to why Madge Sinclair was cast, at least in the videos not taken down by Disney. (There’s a part 2 that has apparently been completely nuked from the internet and we couldn’t drum up a copy of the laserdisk or content elsewhere.  If you have such a copy, let us know if it mentions it in the comments below.) Similarly, the specific reasoning behind the casting for Coming to America is difficult to pin down, presumably because it’s a mediocre Eddie Murphy film from the 1980s.  Well-documented evidence is hard to come by.  If you happen to have been involved in the casting on that one, again feel free to enlighten us in the comments below. 🙂

As for other coincidences surrounding the films. James Earl Jones was the voice of Darth Vader before both Coming to America and The Lion King, so basically Jones has played both the worst and best fictional fathers in cinema. Further, on the set of Coming to America, Madge Sinclair stars alongside  John Amos, who just so happened to play her husband in the acclaimed TV series, Roots. A TV series that went on to star, you guessed it, James Earl Jones. After they appeared together in Coming to America, but before The Lion King, Jones and Sinclair also appeared in the show, Gabriel’s Fire, in which they both won an Emmy.  Seemingly they liked working together.

In any event, we’re now wondering how we’d contact James Earl Jones about that Expendables idea we had. We think that could make a lot of money, and I think we can agree that we’d all love to have Barry White back. In the end, we’d settle for having Jones’ voice on our voicemail to replace our current message.