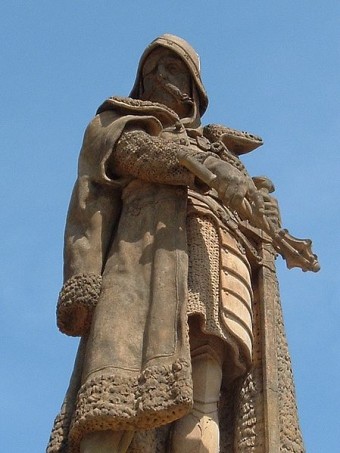 Jan Zizka (aka Jan Žižka z Trocnova a Kalicha)  is regarded as one of the single finest military minds in world history. He also had his skin turned into a drum.

Before we get to his death, though, we want to discuss Zizka’s life, because well, frankly it was remarkable. For starters, Zizka, born in 1360, is generally considered to have never lost a battle. What makes this feat even more impressive is that, whereas the few other generals in history who’ve done this had powerful armies at their command, Zizka was in command of only peasants and rebels.

Zizka was a general during something known as the “Hussite Wars” which, in a nutshell, was an uprising by protestant dissenters against the Catholic Church. The Hussites, who were mostly Czechs, followed the teachings of Jan Hus, a Czech priest who was burned at the stake for heresy in 1415. You can read an eyewitness account of Hus’ death, here, if you’re interested in that sort of thing.

But we’re getting a little head of ourselves, prior to becoming a general for the Hussites, Zizka was actually a mercenary fighting for whomever paid him the highest wage. It was during his time as a mercenary, during the First Battle of Tannenberg (aka, the Battle of Grunwald) in 1410, that Zizka lost one of his eyes. After getting his eye stabbed out of his face, Zizka was still instrumental in helping claim victory that day for the Polish.

Around four years after Hus had been executed, in 1419, the Hussites following his teachings took the first few steps towards a full scale revolt against the Catholic church by storming the town hall in Prague. Led by Zizka and a priest called, Jan Želivský, a group of Hussite protesters threw 7 (though some sources say 11) city councilors from a window.  Supposedly, the protesters never set out with the intention of violence; originally they were just there to petition for the release of a group of unfairly imprisoned fellow Hussites. However, the crowd began baying for blood when an unknown person from within the town hall threw a stone at them. The protest and subsequent riot is known as The First Defenestration of Prague.

The First Defenestration of Prague is widely accepted as the event that kick-started the Hussite Wars which lasted all the way until 1434. Luckily for the Hussites, under the leadership of Zizka, they won victory after victory, despite generally being vastly outnumbered.

Zizka’s prowess on the battlefield was linked to a combination of his ability to effectively use the terrain of the battlefield to his advantage and his amazing ability to innovate, including being among the first to effectively incorporate small gun powder weapons in battle and developing what were essentially tanks. We’re not using hyperbole here by the way, Zizka personally oversaw the construction of “war wagons”- heavily armoured wagons, from which his men could safely pepper the enemy to death with crossbow bolts and hand cannon balls.

These war wagons were instrumental in many of Zizka’s victories and helped him and his men overcome almost impossible odds. For example, during the Battle of Sudomer, Zizka and a force just 400 lightly equipped men managed to fight off over 2000 well trained soldiers.

Though his war wagons were indeed formidable, Zizka himself didn’t hide behind them, generally preferring to fight the enemy head on. His skill and ferocity on the battlefield quickly earned him the respect of his men, and his enemies. In fact, Zizka was so determined to lead his soldiers regardless of the odds, that he even did so after he lost his other eye during a battle in 1421. Zizka even once managed to lead an ambush against a group of men who’d tried to ambush him while he was completely blind in both eyes.

Zizka continued leading his men until 1424, when he finally died, not from running into battle blind, but from the plague. Before his death though, Zizka requested that his skin be flayed from his body and used to make a drum. We’re guessing that when you read the title of this piece you assumed that Zizka’s skin was ripped off by an enemy looking to make an example of him or something like that, right? But no, Zizka’s skin was ripped off at the personally bequest of Zizka himself. Why? So that his men could beat the drum as they marched into battle; so that even in death, he could lead them on!