Why Do We Cry? 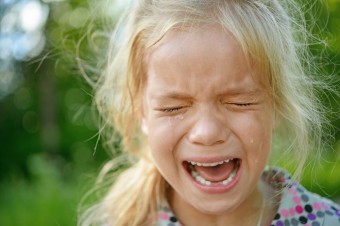 Tears are a product of the lacrimal system, which:

Has secretory and excretory functions that produce tears and drain them. The main lacrimal gland, located between a shallow depression in the frontal bone and the eyeball, is responsible for producing tears stimulated by irritation or emotion. There are many smaller, accessory glands that also contribute to tears . . . . [which once produced, then] drain . . . into ducts that drain into the lacrimal sac [and then] . . . flow into the nasolacrimal, which empties into the nose.[i]

Throughout the day, the eye produces tears to protect itself and keep from drying out. Depending on the size of the eye, the average human makes anywhere from just over one-half to just over one cup of basal tears every day. These all-purpose tears:

So many basal tears are required because during the day:

Some of the fluid evaporates between blinks and some is drained through small permanent openings at the nose end of each eyelid . . . [ii]

Protecting the eye from irritants, reflex tears result from a message sent from the cornea to the brain stem, which then “sends a hormonal signal to [the] lachrymal glands causing the tear response to kick in.” Intended to shield the eye, unlike basal tears, reflex tears:

Are designed to break down and eliminate eyeball-intruders like airborne dust [so] these tears tend to flow in greater amounts and probably contain a greater concentration [when compared to basal tears] of antibodies and enzymes that target micro-organisms.

Charles Darwin theorized that since, in his view, human crying was simply a distress call, the tears produced by it were no more than a reflexive reaction caused by the strain of crying out:

Weeping is probably the result of some such chain of events as follows. Children, when wanting food or suffering in any way, cry out loudly . . . . Prolonged screaming inevitably leads to the gorging of the blood-vessels of the eye; and this will have led . . . to the contraction of the muscles round the eyes in order to protect them. At the same time the spasmodic pressure on the surface of the eye, and the distention of the vessels within the eye . . . will have affected, through reflex action, the lacrymal glands. Finally . . . the association . . . of certain actions, being more under control of the will than others – it has come to pass that suffering readily causes the secretion of tears . . . .[iii]

Humans are the only species known to cry emotionally, and unlike the other two, emotional tears involve nerve impulses that stimulate the cerebrum:

Where sadness is registered. The endocrine system is then triggered to release hormones to the ocular area, which then causes tears to form.

Many scientists believe that emotional crying helps eliminate stress-related hormones from the body including:

Prolactin, adrenocorticotropic hormone (ACTH) and leucine encephalin (a natural painkiller) [and as a result] . . . research suggests that emotion-induced crying is therefore, at least in part, an excretory process which removes stress-related toxins.

In support of this theory, at least one neuroscientist has argued that stress-reduction, and mood modulation, explain the “evolutionary purpose of quiet tears“:

The topical application of NGF [nerve growth factor present in tears] promotes the healing of corneal ulcers and may increase tear production in dry eye . . . I suggest that tears bearing NGF have an anti-depressive effect that may modulate as well as signal mood.

Other research also supports the hypothesis, and found that:

Crying improves the mood of 88.8% of people and it can also help with healing, boosting immunity and reducing levels of anger and stress. . . . Chemicals that build up during emotional stress may be removed in our tears when we cry.

In recent years, some researchers have revisited Darwin’s theory, but with a twist, proposing that emotional crying developed simply as a quieter way for humans to signal distress without alerting a predator or other threat:

When other animals grow old, most no longer emit distress signals, presumably because it is too dangerous . . . By contrast, in humans there is a shift from the acoustic signal emitted in all directions, toward the visual signal of tears, which especially fit closer, more intimate interactions.