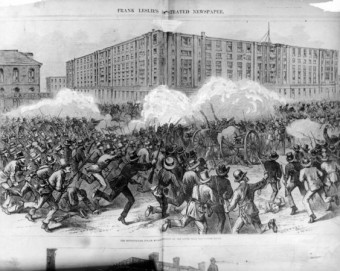 For a few bloody weeks in August and September 1874, in an effort to retake control of their communities, white supremacists rampaged across Louisiana. By the time the smoke cleared (and federal troops arrived), at least six white men and many dozens of black freedman had been killed.

Following the end of the Civil War, a white man from Vermont, Marshall H. Twitchell, relocated to Bienville Parish, Louisiana to be its Freedman’s Bureau agent. From this post, Twitchell, a former Captain in the Union Army and commander of U.S. Colored Troops (USCT), became a wealthy and powerful man in the region.

In 1866, he married the daughter of a wealthy planter and purchased a plantation for himself on the eastern shore of Lake Bistineau. Later, around 1869-1870, he purchased another property in De Soto Parish, known as the Starlight Plantation.

During this time, he encouraged his brother (Homer), mother and three sisters, with their husbands, to move to Louisiana. Other Northerners joined them, and together, the locals referred to this community of carpetbaggers as a “Yankee Colony.”

In 1871, Marshall was instrumental in creating the Red River Parish from pieces of its neighbors. Conveniently establishing its seat in Coushatta near his Starlight Plantation, Marshall soon became “the local political boss.”

Despite his power grab, the creation of Red River Parish was popular with local whites, at least as first, as the parish seat encouraged economic recovery.

In 1873, however, two devastating blows hit the small and isolated Louisiana community. A yellow fever epidemic struck and killed some of Coushatta’s leading citizens. In addition, the Panic of 1873, in which banks and industries across the nation declared bankruptcy following the collapse of the railroad industry in September, “dried up credit and drove many of the parish’s leading planters and merchants out of business.”

To add insult to injury:

Bad weather and the army worm destroyed much of the cotton crop. The corn crop failed as well. ‘It really does seem’ the Coushatta Citizen commented . . . that our people ‘have struggled against more disasters, undergone greater hardships, and lived hard and had less credit this year than ever before.

Called by some the “military arm of the Democratic party,” the League differed from groups like the Klan and the Knights of the White Camellia in that it operated openly. In its manifesto, published in the Picayune, the League railed against:

The execrable oligarchy of the most ignorant and profligate negroes, leagued with the most dangerous class of rapacious whites, the scum of society. . . . . Where the white rules, the negro is peaceful and happy; where the black rules, the negro is starved and oppressed.

Local Leagues were formed throughout the region that summer, and the first attack, seizing control of Natchitoches Parish government, happened only 27 miles from Coushatta in July 1874. Reading the writing on the wall, the Red River Parish sheriff, a Republican, explained to Marshall:

Pierson & Abney came back from Natchitoches red hot and on the war path. . . . It is simply extermination of the Carpet bag and Scalaway Element. Nothing more nor less.

Assassination of Thomas Floyd and the “Negro Uprising”

One month later, things came to a head:

Around midnight on August 25, whites murdered Thomas Floyd a black Republican in the Brownsville community, [near] Coushatta . . . . Two days later, the Red River White League arrested six prominent white Republicans on the pretext that they were plotting a murderous Negro rebellion.

Nonetheless, in addition to the whites, twenty black Republicans were also seized, although their names were, apparently, not recorded.

As news of the “uprising” spread throughout the region, within two days, hundreds of armed white men – some coming all the way from Texas – had converged on Coushatta. According to T.W. Abney’s testimony:

The news of the move [by supposedly armed black men] on Brownsville and the shooting of Dickson spread rapidly to the adjoining parishes, and then far and near, so that by Friday evening over a thousand white people had assembled at Coushatta.[i]

After seeing the numbers amassed, William Howell, who viewed the chaos from his confinement, is reported to have said, “Where in the name of God did all these people come from.”[ii]

After what has been characterized as a “star chamber trial of the white prisoners,” to a man, the six white Republicans:

Resigned their offices and promised in writing to leave the state and never return.

Guarded by a group of men led by Abney, the prisoners were riding toward Texas when they were overtaken:

They haven’t gone far when they look back and see a large body of thirty or forty men riding hard, closing in upon them. Out front is a heavily bearded man, sweat just streaming from his body, and as he approaches the rear guard he screams out ‘Get out of the way or share the prisoners’ fate.’ The guards get out of the way; they offer no resistance . . . . And almost immediately, three of [the prisoners] are shot from the saddle. Homer Twitchell supposedly cried out, ‘Somebody give me a gun. I don’t want to die like a dog.’ And a bullet hits him in the face a moment later.

At the same time, black leaders were being brutally murdered as well. South of Coushatta, Levin Allen had his arms and legs broken, and then they “burned him alive.” Shortly following, after another “trial,” Louis Johnson and Paul Williams were hanged, purportedly by the mob that had shot and killed the white Republicans.

Emboldened, the White League next set its sights on New Orleans where members eventually took control of the city. In response, President Grant sent in federal troops to restore order. Winning the battle but losing the “war:”

The spectacle of federal soldiers marching into a state legislature was a shock – not only in the South, but all across the North. Many felt that Grant . . . had overstepped his constitutional powers. ‘If this can be done in Louisiana,’ said one senator, ‘how long before it can be done in Massachusetts and in Ohio?

No one was ever convicted for the Coushatta crimes.