This Day in History: January Seventeenth 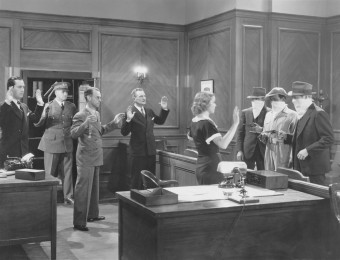 On the night of January 17, 1950, a group of armed gunmen wearing blue suits, very similar to Brinks uniforms, and Halloween masks held up five employees at the Brinks building on Prince St. in Boston. They were instructed at gunpoint to lie on the floor facedown. Their mouths were taped shut and their hands were tied behind their backs. The robbers made off with $1.2 million in cash, plus another $1.6 million in securities and checks (about $27 million total today). This was the largest robbery in the U.S. up to that time, and was considered the crime of the century.

This was no hastily put together scheme. The robbery was carefully and meticulously planned for at least a year. The routines of the Brinks employees were observed daily, lock cylinders were removed and duplicate keys made. Members of the Brinks gang entered the building after hours to learn the layout and consider different modes of entrance and escape. They covered every base possible.

The FBI and the Boston Police didn’t have a lot to work with. A hat, tape, rope and a witness who saw the get-away car was the only evidence they had initially. Many leads poured in, but most were dead ends. However, the investigation continued relentlessly. The list of suspects was narrowing, and pressure was put on these individuals in the form of increased surveillance and additional interviews.

Some of the Brinks gang ended up in jail for other offenses in other states. They began to argue among themselves, and suspicion between them quickly grew.

One of the gang confessed to the crime on January 6, 1956, when facing unrelated charges and jail time. On January 11, eleven more members of the gang were indicted and arrested for taking part in the Brinks robbery.

In June of 1956, the fates smiled down on the prosecutor when a $10 bill that was traced back to the robbery ended up in the hands of an arcade owner who contacted police when he thought he’d been passed a counterfeit bill. The money led back to an office building back in Boston, which had about $52,000 of Brinks bucks hidden in its walls.

Eight members of the Brinks gang were found guilty of multiple charges in the robbery and sentenced to life in prison in October 1956. They almost got away with it, because in just a few days the statute of limitations for most of the crimes they were charged with would have run out, and they would have gotten off scot-free.