August 26, 2013 Emily Upton
Kris W. asks: What is it in seaweed that is used in making ice cream? 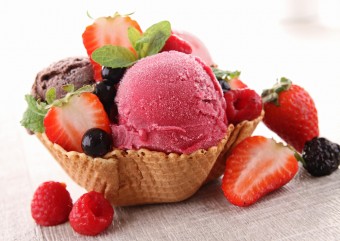 Seaweed didn’t exactly come into play during those “make your own ice cream” science experiments you probably did in elementary school, but it is sometimes used in the making of commercial ice cream. No, it isn’t just in seaweed-flavoured ice cream, either. Seaweed is actually used as a type of thickening agent for ice cream.

Technically, the substance usually used to thicken the ice cream is called “agar” or “agar-agar.” The name comes from the Japanese word for “red algae.” It was discovered in 1658 by Minora Tarazaemon, a Japanese innkeeper who supposedly left extra seaweed soup outside overnight. It was winter, and the substance froze. Tarazaemon noticed in the morning that it had turned into a sort of gel when it thawed again.

Whether that’s exactly how Tarazaemon discovered it or not, it was later found that after first boiling seaweed, repeated thawing and freezing makes a pure, gelatinous substance perfect to use as a thickening agent. It’s likely that the process was picked up by the Dutch in the 17th century and later spread to other East Indies ports.

Today, agar is used in a variety of processed foods as an emulsifier or binding agent. Not every country or company uses it; some use carrageenans instead, which is made from certain red seaweeds. The use of different substances is based purely on preference and availability of resources. For instance, during World War II the availability of agar was low, so many companies switched to using carrageenans instead and stuck with it even after agar became more widely available again. (A similar thing happened with Twinkies, where during WWII bananas were in short supply, so Hostess switched to using a vanilla cream filling, rather than banana cream.  The vanilla cream filling turned out to be much more popular, so they never switched back to banana cream filling, though kept the banana-like look to the Twinkie anyways.)

But you make homemade ice cream with just milk, sugar, and a bag full of ice and salt—so why is a binding agent needed in the production of commercial ice cream?

The basic components of ice cream are fat (usually from milk), sweeteners, air, ice crystals, and “other solids” which includes non-fat milk solids and various flavours (like bits of cookie). When the ice cream liquid is prepared, often an emulsifier and stabilizer must be added to keep all the ingredients together and improve the texture. That’s where the seaweed comes into play.