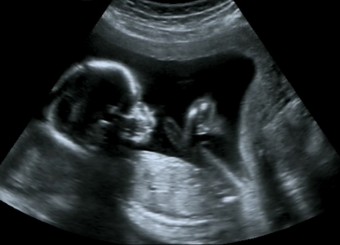 As fascinating as it is horrifying, fetus-in-fetu is a developmental abnormality where, in utero, the larger of a set of twin fetuses absorbs the other into her body. The condition is usually diagnosed shortly after the surviving twin is born, although in a few horrific cases, the absorbed twin is not discovered until adulthood or death.

Technically arising only in monozygotic diamnotic twins where the division is rather uneven, fetus-in-fetu is extraordinarily uncommon, believed to occur in only 1 in 500,000 births.

In 2008, the Journal of Medical Case Reports published an article about a fetus-in-fetu (FIF) in a two-month old baby. The absorbed twin had attached to the baby’s right kidney as a “sac [that] contained a clear fluid.” The twin reportedly weighed eight ounces and measured 3 x 4 x 5 inches. Upon examination of the sac, it was determined that the fetus “was covered entirely with intact skin [and had] 2 malformed lower limbs . . . 4 rudimentary digits . . . [as well as the] lungs, liver and spleen.” Happily, though, after removing the absorbed twin, the surviving twin was reported to now be leading “a completely normal healthy life.”

Likewise, in 2012, the APSP Journal of Case Reports published the story of a four-month old boy whose twin was encased in a “whitish-gray membrane” inside his abdomen. During surgery to remove him, it was discovered that the absorbed twin had developed “vertebrae, long bones like femur, tibia and fibula . . . [and] other rudimentary organs.”

Several years before these reports, in a 1974 edition of the Annals of Surgery, a FIF was discovered in the belly of a six-month old baby boy. When removed, it was found to be missing most of the brain and skull but possessing “upper limb buds . . . [and a ] spleen, pancreas, and adrenal gland [as well as] a primitive femur, tibia, fistula, and primitive foot and phalanges.” On this poor creature, hair was found. The surviving twin was apparently no worse for the experience and was reportedly in good health after surgery.

Unlike the first three babies, who suffered few symptoms (other than the bulging mass), the baby reported in a 2007 article in the Journal of Indian Association of Pediatric Surgeons became gravely ill before her internal twin was found. Taken to the hosptial with respiratory distress, the baby underwent emergency surgery that removed “an incompletely developed fetus” that measured 3 x 4 x 8 inches. Tragically, the fetus had “a head and trunk . . . the presence of skin, germinating buds of limbs [and] central nervous tissue.”

Occasionally, the condition is discovered pre-partum as it was for Baby A, the story of which was reported in the Annals, Academy of Medicine, Singapore, in 2005. First seen in a 31-week prenatal exam, Baby A was delivered by caesarean section and a laparotomy was soon performed. The removed fetus consisted of an amniotic sac with “malformed lower limbs . . . rudimentary digits . . . colon . . . [and] spinal cord.”

So those were the easy reports. Now consider these:

In 2006, doctors removed TWO fetuses from their sister, little two-month old Nazia, in Islamabad, Pakistan. As the doctor who removed the two partially developed little ones noted, “Basically, it’s a case of triplets, but two of the siblings grew in the other.”

Fetus on the Brain

The BBC reported in 2008 that little three-day-old Sam Esquibel had “a nearly perfect foot and the partial formation of another foot, a hand and a thigh” pulled from his brain. His pediatric neurosurgeon described the operation: “It looked like the breech delivery of a baby, coming out of the brain.”

In 1999, thirty-six year old Sanju Bhagat was taken to the hospital in Nagpur, India in respiratory distress. For years before, his belly had been distended, so much that, according to reports, he always looked as if he were pregnant and at full term. When he arrived at the emergency room, doctors rushed him into surgery to remove what they expected to be a really large tumor.

The experienced physicians were shocked by what they saw:

As the primary surgeon said, “To my surprise and horror, I could shake hands with somebody inside.” Sanju survived the operation and was reportedly in good health.

The Worst Fetus-in-Fetu Story Ever (I dare you to find a worse one.)

The suffering of those souls pales in comparison to that of John Hare, a baby born on May 18, 1807. Shortly after his birth, a mass on his abdomen appeared. Within a month, he was constantly ill and suffered from frequent vomiting and runny, green and yellow poo. By January 1808, he was “a mere skeleton clothed in skin,” yet, as he “daily became thinner . . . the tumour in the abdomen rapidly increased, until at length [the tumor] was nearly thirty-six inches in circumference.” After John died, an autopsy revealed his twin, and the doctor described it:

The surface of this singular monster was covered with a quantity of sebaceous matter, such, in all respects as is often met with on the skin of infants recently born. When this was removed the creature appeared as rosy and as healthy as if it had been yet alive. Its short and stout limbs were plump and firm; they were almost fixed in a posture resembling that in which the foetus in utero is usually found. . . . [However] above and between the shoulders was situated a dark red fleshy mass in the place of head.