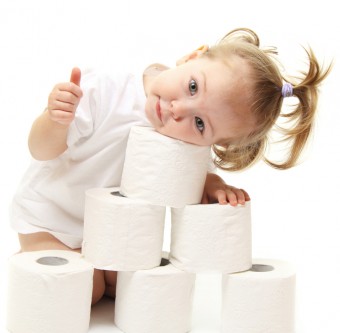 Today I found out it’s only been very recently that people in the U.S. started using toilet paper.

So what did people use for wiping before toilet paper?  This depended greatly on region, personal preference, and wealth.  Rich people often used hemp, lace, or wool. The 16th century French writer Francois Rabelais, in his work Gargantua and Pantagruel, recommended using “the neck of a goose, that is well downed”.  The goose is kind of getting the crappy end of that deal. *crickets*

Poor people would poop in rivers and clean off with water, rags, wood shavings (ouch!), leaves, hay, rocks, sand, moss, sea weed, apple husks, seashells, ferns, and pretty much whatever else was at hand and cheap/free.

For seaman, the common thing was to use old frayed anchor cables (seriously).   The Inuit’s and other peoples living in frigid regions tended to go with clumps of snow to wipe with, which, other than the coldness factor, is actually one of the better options it seems compared to many other of the above methods.

Going back a ways in history, we know the Ancient Roman’s favorite wiping item, including in public restrooms, was a sponge on a stick that would sit in salt water and be placed back in the salt water when done… waiting for the next person…

Back to America, one extremely popular wiping item for a time was corn cobs and, later, Sears and Roebucks, Farmers Almanac, and other catalogs.  The Farmers Almanac even came with a hole in it so it could be easily hung in bathrooms for just this purpose… reading and wiping material in one!

Around 1857, Joseph Gayetty came up with the first commercially available toilet paper in the United States.  His paper “The greatest necessity of the age!  Gayetty’s medicated paper for the water-closet” was sold in packages of flat sheets that were moistened and soaked with aloe.  Gayetty’s toilet paper sold for about 50 cents a pack ($12 today), with 500 sheets in that package.  This wasn’t terribly popular, presumably because up to this point most people got their wiping materials for free from whatever was at hand.

Around 1867, brothers Edward, Clarence, and Thomas Scott, who sold products from a push cart, started making and selling toilet paper as well.  They did a bit better than Gayetty; their original toilet paper was much cheaper as it was not coated with aloe and moistened, but was just rolls of somewhat soft paper (often with splinters).

As the indoor flushable toilet started to become popular, so did toilet paper. This is not surprising considering there was nothing really to grab in an indoor bathroom to wipe with, unlike outdoors where nature is at your disposal.  The age old Farmers Almanac and similar such catalogs also were not well suited for this purpose because their pages tended to clog up the pipes in indoor plumbing.

Even once it became popular, wiping with toilet paper still doesn’t appear to have been painless until surprisingly recently.  The aforementioned splinter problem seems to have been somewhat common until a few decades into the 20th century. In the 1930s, this changed with such companies as Northern Tissue boasting a “splinter free” toilet tissue.