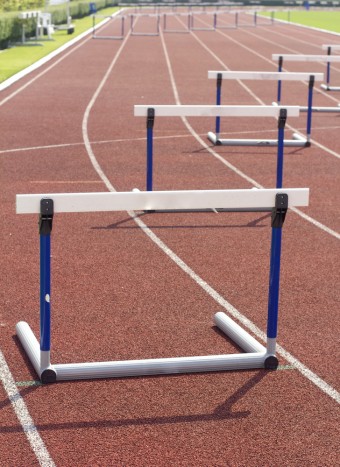 Perhaps she was hoping it would become the next Olympic sport. I mean, the 1904 Olympics included greased pole climbing and mud fights, so why not hurdling with swim fins? Regardless of her motivations, Zheng Da Zong Yi holds the record for the fastest hundred meter hurdle wearing swim fins with a time of 18.523 seconds, which… whew.  I know people who couldn’t do it in that time without the swim fins…

As for the men’s record for that same event, that one’s currently held by Christopher Irmscher of Germany who did it in 14.82 seconds.

The vagina is likely the only muscle in the entire body that body builders do not typically try to strengthen when transforming their bodies into a map of muscles. There are machines in gyms for every muscle group you can think of except genitalia. That did not stop 42-year-old gymnast and personal trainer Tatiata Kozhevnikova of Russia from training her vaginal muscles for the past 15 years and eventually winning the world record for strongest vagina!

For her record breaking squeeze, she and her vagina lifted a 30.86 pound (14 kg) glass ball. It seems that Tatiata started her vaginal training after the birth of her daughter. She explained her reasons for doing this:

After I had a child, my intimate muscles got unbelievably weak. I read books on Dao and learned that ancient women used to deal with this problem using wooden balls. I looked around, saw a Murano glass ball and inserted it in my vagina. You insert one of the balls in your vagina and it has a string attached to it with a little hook at the very end. You fix a second ball on to this hook.

Tatiata advises other women to exercise their vaginal muscles, not to break her world record, of course, but to strengthen their internal muscles and to help make sex more pleasurable. Although, I think most men upon hearing of her talent might worry about the potential for her ability to feel like the world’s strongest vise grip if not handled correctly.

3. The Fastest Time to Enter a Zipped Suitcase

Perhaps one could understand the existence of a world record for fastest time to pack a suitcase for a Disney World vacation, but a record for a human putting themselves in a suitcase? There is a record for such an event and it belongs to Leslie Tipton who achieved this title on LIVE! with Regis & Kelly show, September 14, 2009.

Her time – 5.43 seconds. One can only speculate on what originally motivated her to become the fastest human cargo in the world…

Someone must have had a strong desire to become a better typist… Michele Santelia got to be so proficient at typing backwards that he won the world record for most books typed backwards.  Without looking at the screen, Michele used a computer and four different completely blank keyboards to type 68 books backwards in their original languages including Macbeth, The Vulgate Bible, the Dead Sea Scrolls in Ancient Hebrew and The Odyssey. The 68 books came to 3,663,324 words, 20,680,060 characters , 24,154 pages, 266,741 paragraphs and 516,498 lines! But who’s counting? (Also, it should be noted that he’s still planning on adding to this record.)

5. Most T-shorts Worn at Once

On April 24, 2008 Jef Van Dijck successfully donned 227 t-shirts at once in the town of Brecht, Belgium. Looking at a picture it seems that at shirt 227 all that remained of his face were the top of his eyebrows and his forehead. That is not typically how one wears a t-shirt but perhaps he was granted the record because he did not sweat to death or die of mechanical asphyxiation under the weight of all that cotton!

Rapunzel lookout! Xie Qiuping’s hair is 5.627 meters long (18 ft. 5.54 in.)! This is so long that she must wear it in a tiara on her head and travel with an attendant. If you were the attendant imagine explaining what you do for a living. Xie’s last haircut was in 1973 and she has been growing it out since she was a child.  One can only imagine her annual shampoo and conditioner bill.  This one will not just be hard to break because of how long its been since she’s had a hair cut, but also because most people’s hair stops growing well before reaching anywhere close to this length. (Find out why here: Why Does Hair Only Grow to a Certain Length)

This record was set, then broken and reclaimed. In 2004, Lluis Colet gave a speech that lasted 48 hours and claimed him the Guinness Book World Record for longest speech. However, an Indian man delivered a 120 hour speech which knocked him out of the record book. Not letting him get away with it, then 62 year old Colet upped the ante and gave a 124 hour speech- five straight days and four nights. He spoke of many things during his speech, most prominently of artist Salvador Dali.

Talk about kitchen nightmares! Can you imagine spending almost $200 on a pizza! That’s what you would pay for one at Gordon Ramsey’s Maze Restaurant located in London, England. The most expensive pizza, commercially available, is a thin-crust, wood fire-baked pizza topped with onion puree, white truffle paste, fontina cheese, baby mozzarella, pancetta, cep mushrooms, freshly picked wild mizuna lettuce and garnished with fresh shavings of a rare Italian white truffle. The white truffle itself is worth $2,500 per 1 kg (2 lb 3 oz). Depending upon the amount of truffles available each season, the pizza is regularly sold at $178 each to customers of Mr. Ramsey’s restaurant.

Dolly Parton has nothing on this woman! The largest natural breasts in the world belong to Annie Hawkins-Turner (aka Norma Stitz) from New York,USA, who has an under breast measurement of 43 inches (109.22 cm) and an around chest-over-nipple measurement of 70 inches (177.8 cm)! Definitely more than a handful!  The suitcase zipper girl could probably fit in one of these bazingas….

As of April 10, 2011 when she set the record, Charlotte Lee of Huntington Beach, USA had 5,631 different models of rubber ducks. She has been collecting them since 1996. Maybe she’ll have Ernie over.