The Difference Between Turtles, Tortoises, and Terrapins, and Other Turtle Facts 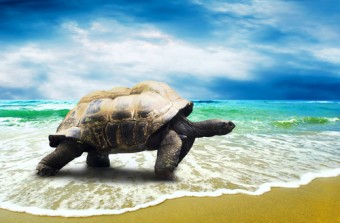 All three animals come under the class of reptiles, in the taxonomic order of Testudines or Chelonia (which comes from the Greek word ‘kelone’, meaning interlocking shields or armor). They all have the major characteristics of reptiles as they are cold-blooded (eco-therms), have scales, breathe air, and lay eggs on land.

The distinction between them comes mainly from what living habitat they are adapted for, though the terminology differs slightly in certain countries.  For instance, in Australia, other than marine sea turtles, they are all called tortoises. In the United States, the term ‘turtles’ is given to chelonians that live in or near water.  That being said, in general there are a few commonly accepted distinctions between turtles, tortoises, and terrapins.

“Turtles” are generally naturally gifted at ninjutsu… or rather, they may be completely aquatic, like sea turtles, which rarely come up onto land, excepting to lay eggs.  Other types of turtles are semi-aquatic and live by fresh water ponds or lakes. They tend to swim, but also spend a lot of time on land, basking in the sun and occasionally burrowing in the mud.

Turtles have adapted to an aquatic life and are streamlined for swimming with webbed feet, or in the case of sea turtles, long flippers.  Turtle diets are not strictly vegetarian either, they are omnivores. Depending on the type of turtle, they may eat jelly-fish, small invertebrates, sea sponges or sea-vegetation. In the case of fresh water turtles, they may eat plants or insects and small fish.

Tortoises, on the other hand, are almost exclusively land-dwelling animals, usually with stubby feet, and aren’t good swimmers. They occasionally enter water bodies to clean themselves off or drink water, but could easily drown in the deep or in strong currents. Their bodies are adapted to living on land and they aren’t stream-lined like turtles, but rather display high domed shells and column shaped feet much like that of elephants.  They also sometimes have sharp claws for digging . Another major distinction is that tortoises are for the most part herbivorous and primarily eat low-lying shrubs, cacti, grasses, weeds, fruit, and other forms of vegetation.

Lastly, the term “terrapins” is sometimes used for turtles that are semi-aquatic and live near brackish waters or swampy regions. They’re sort of like a mix between a turtle and tortoise, as they spend most of their time divided between water and land. They are also usually small and have a hard-shell that’s shaped somewhere between a turtle’s streamlined one and a tortoise’s rounded dome shaped one.