This Day in History: December 3 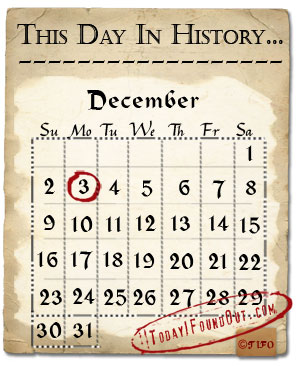 On this day in history, December 3rd:

1910: The French “Thomas Edison“, George Claude, demonstrates the modern neon light at the Paris Motor Show.  Claude designed and developed the neon light as a way to find a financially profitable use for the neon his air liquefaction company ended up with as a byproduct of the liquefying process. Among the significant differences between Claude’s neon tube lighting and other similar lighting at the time was the fact that his system included a way to purify the gas within the sealed glass tube, as well as a way to significantly diminish the rate of degradation of the light.

Among Claude’s many other inventions, he developed a system for generating electricity using wind turbines to pump up deep ocean water (using the temperature difference of the surface water and the deep water to generate power); developed a way to make acetylene significantly less explosive for transport (at the time transporting acetylene was tricky, and dangerous business); devised the Claude system for liquefying air, making liquid nitrogen, oxygen, and argon for the first time commercially viable in industrial quantities (he also developed liquid chlorine used by French forces during WWI to attack enemy troops with); developed a method for synthesizing ammonia; significantly improved existing methods for generating electricity using liquid oxygen; and pioneered the practice of using liquid oxygen when smelting iron.

Unfortunately, the end of his life wasn’t quite as productive as the beginning partially owing to his curious decision to back the Axis powers after Germany invaded France.  Not only that, but he publicly supported extreme force being used to quell French Resistance forces, basically the quintessential “I for one welcome our new Nazi overlords“.  Because of this, on December 2, 1944, his membership in the French Academy of Sciences was revoked and he was given a life sentence in prison.  He only served about five years though before a few of the more influential people he knew managed to secure his release.

1967: In Cape Town, South Africa, Christiaan Barnard vaults himself into super-stardom among doctors by performing the first successful human to human heart transplant, in an operation that took 9 hours and 30 people to complete.  Unfortunately for the person who received the transplant, Louis Washkansky (who had an incurable, soon to be fatal, heart disease), Barnard and his colleagues misinterpreted certain signs five days after the surgery, thinking the heart was being rejected; so they heavily introduced immunosuppressants, which resulted in significantly weakening Washkansky’s immune system and causing him to die of pneumonia 18 days after the surgery.  The heart that was placed in Washkansky was from Denise Darvall, who had been in a car accident the day before and was rendered brain dead.  Her father then gave Barnard permission to stop her heart and take it to be put in Washkansky.

1992: The first SMS text message is sent by 22 year old test engineer Neil Papworth, working for Sema Group.  The text of this message was “Merry Christmas”. About 8 trillion text messages were sent in 2011 and the number for 2012 will end up surpassing that.  The 2011 numbers equate to about 1100 text messages per person on the planet per year.

Today, text messages are usually sent using Short Message Service (SMS) or Multimedia Messaging Service (MMS) when including multimedia like pictures or videos.  SMS messages themselves typically consist of 140-190 bytes each of data (depending on provider implementation).  This means that the average cost per text (when not on some plan) of 20 cents per text equates to about $1300 per megabyte of data transferred.

To put this in perspective, a one minute phone conversation uses on average about the same amount of data as 600 text messages ($120 worth without a plan).  Thus despite the exorbitant cost of text messaging, sending texts actually saves cell phone providers significant money in infrastructure costs over the data needed for phone conversations.

To further illustrate the ridiculousness of texting costs, data plans can be purchased from most providers for several gigabytes of transfer per month for under $50.  In contrast, 3 GB’s (3,221,225,472 bytes) of data transfer via text messages would cost you about four million dollars at .20 cents per text.

Given that the top cellphone providers have a virtual monopoly and they can pretty well set the price of text messaging as they please and there’s nothing people can do about it, this isn’t likely to change anytime soon.  In fact, the cost per text has actually risen steadily for about four years in a row as these companies continue to try to milk texting for every dime they can.