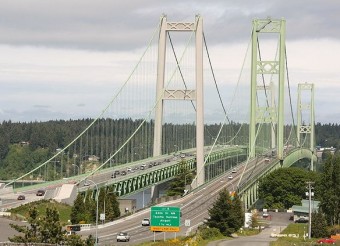 Today I found out the only victim of the Tacoma Narrows, “Galloping Gertie”, bridge collapse was a three legged dog.

The three legged dog in question was a black Cocker Spaniel left in the back seat of the lone car abandoned on the galloping bridge.  The dog was owned by reporter Leonard Coatsworth, though his wife stated in an interview that it was her dog. (No doubt it went over really well when he told her he’d left the dog in the car when he abandoned it on the doomed bridge!)

On November 7, 1940, Coatsworth was attempting to drive across the four month old Tacoma Narrows bridge that at the time was the third longest suspension bridge in the world (today the 33rd longest). He was forced to abandon his car about 450 feet from the East Tower and a total of 1,895 feet from the Toll Plaza because of the extreme motion caused by a wind storm that had winds as high as 42 mph (69 km/h).

Three people attempted to save the dog, Coatsworth himself (no doubt thinking of the lashing he’d get when he got home and told his wife he’d abandoned her dog), a friend of his, Howard Clifford, and finally a man on the scene, University of Washington Engineering Professor F.B. Farquharson, who had arrived to observe the bridge’s motion.

In all cases, they were unsuccessful.  However, in the the case of the brave professor, he actually managed to get to the car and even to get near the dog. But, as you might imagine, Tubby was in no state to let some random person pick him up and remove him from the car.  As such, when the Professor opened the car door and attempted to grab the dog, Tubby snapped at him, managing to bite the index finger of the hand that was trying to save him.

Unable to secure the dog without bodily harm, Farquaharson left the car and the dog, returning to safety.  None too soon either as a few minutes after Farquharson returned from his dangerous walk to save the dog, the bridge collapsed, sending the car and Tubby to a 200 ft fall into the Tacoma Narrows, which at that location had a depth of about 125 ft.

You can read Bonus Facts and see the video of the collapse of Galloping Gertie below: