October 15, 2012 Dan Lewis
This is a guest post by Dan Lewis. Dan runs the wildly popular daily newsletter Now I Know (“Learn Something New Every Day, By Email”). To subscribe to his daily email, click here. 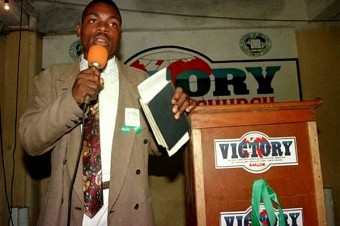 Today I found out about the mass murdering warlord turned christian evangelist who was once known as General Butt Naked.

Joshua Milton Blahyi, pictured above, is a preacher living in Ghana who turned 40 years old on September 30, 2011. About two decades earlier, he was a much different person than the apparently peaceful religious man he is today. So different, in fact, that if you ask him if he should be brought before the Hague on charges of war crimes, his answer is “yes.”

At age 11, Blahyi was initiated as a high priest of the Sarpo tribe in his home country of Liberia. The initiation, according to Blahyi, involved horrors which would make even the most iron stomach churn. As recounted by the Daily Mail, Blahyi, naked throughout, killed a girl not much younger than he was at the time. The murder was part of a ritual sacrifice which continued over the course of a few days, culminating with him eating the girl’s heart and some other body parts. In completing this task, he rose to a position of local prominence. And by his late teens, Blahyi became a key tribal general in the First Liberian Civil War.

There, he got his nom de guerre: General Butt Naked.

Blahyi believed that charging into battle with nothing but a gun and a pair of boots made soldiers impervious to bullets. Yes, in his mind, the birthday suit was not only sufficient armor, but ideal for armed combat, so his troops fought armed but undressed. His squad was nicknamed the Butt Naked Battalion and he earned the General Butt Naked nickname which he is now best known by. (Search Wikipedia for his real name and you will find yourself redirected to the entry titled “General Butt Naked.”)

But while that nickname is certainly deserving of the oddity from which it stems, Blahyi’s true legacy should be for the atrocities he perpetuated in the name of war. As noted in the Daily Mail article cited above, Blahyi’s army was made up of mostly children, a group he turned into the worst kind of murderers.According to his Wikipedia entry, Blahyi confessed to a brutal pre-war ritual which boggles the mind and conscience:

“So, before leading my troops into battle, we would get drunk and drugged up, sacrifice a local teenager, drink the blood, then strip down to our shoes and go into battle wearing colorful wigs and carrying imaginary purses we’d looted from civilians. We’d slaughter anyone we saw, chop their heads off and use them as soccer balls. We were nude, fearless, drunk yet strategic. We killed hundreds of people–so many I lost count.”

In another interview, he stated,

Blahyi cites Satan’s influence as the driving force behind his madness. The devil, claimed Blahyi, appeared to him, instructing him to continue such sacrifices and practices — including eating the hearts of the children he sacrificed — in order to gain and maintain power. He further claims that in 1996, Jesus appeared to him and told him that if he did not repent, he would die — and as such, Blahyi changed his ways. He told the BBC that he “now preach[es] against murder and making human sacrifices” and that he is not proud of his past, but rather “ashamed.”