October 19, 2012 Guest
This is a guest post by Stacy Jameson 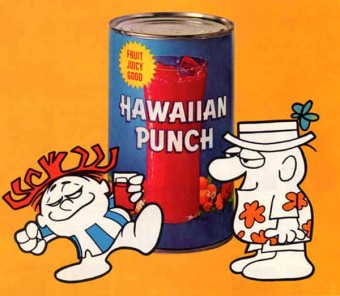 Today I found out Hawaiian Punch was originally supposed to be used as an ice cream topping.

The brand was originally “Leo’s Hawaiian Punch” sold under the company name Pacific Citrus Product Company.  The recipe for the confectionery was created by Tom Yates, A.W. Leo, and Ralph Harrison in a garage in Fullerton, California in 1934.  They started out by selling this tropical fruit flavored ice cream topping to local restaurants, stores, and to certain ice cream makers.

Over the next decade as the syrup’s popularity spread, people started using it not just as an ice cream topping, but also mixing the syrup with water to make a tropical drink.  By 1946, this was a common practice, but the company still didn’t bother selling Hawaiian punch in drink form. This all changed when Reuben P. Hughes and a series of other investors purchased the company in 1946 and began offering it not only in syrup form at grocery stores, but also in the drink forms most commonly associated with it today.

Within a decade of making the switch from primarily selling as an ice cream topping to drink, Hawaiian punch’s popularity skyrocketed and by 1955 it became a national selling brand.  A few years later, they even created their own cartoon character mascot, “Punchy”, who had a propensity to punch people randomly.  The character would ask people, animals, etc. “How about a nice Hawaiian Punch?”  When they’d say “yes”, he’d punch them. (see video below)

As for the name “Hawaiian Punch”, according to the makers this was due to several of the original recipe ingredients, which included apple, apricot, guava, orange, papaya, passion fruit, and pineapple, being imported by Pacific Citrus Product Company from Hawaii.

Expand for References
Disclaimer: Guest Articles are written by various people and while I do my best to make sure they are factual, I do not guarantee that everything in them is going to be 100% accurate as I myself didn’t do the research for these articles and it’s possible their sources, even if they are reputable, are themselves inaccurate.