Difference Between a Donkey and a Mule 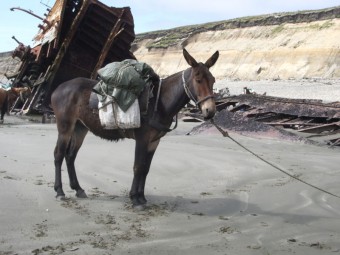 Today I found out the difference between a donkey and a mule.

Put simply, a donkey is the descendant of the African wild ass (of which there are only about 500 left in the wild today).  Donkeys are a different species than a horse, but in the same family.  They were originally bred in Egypt or Mesopotamia around 5,000 years ago.

Mules, on the other hand, are a cross between a female horse and a male donkey or “jack” (hence the word “jackass”).   In contrast, a male horse and a female donkey bred together produces a “hinny”; the name coming from the fact that a female donkey is called a “jenny”, bred with a h-orse.  The offspring of this breeding is very similar to a mule, as you might expect, though generally slightly smaller, which is thought to be because of the smaller womb in a donkey over a horse. 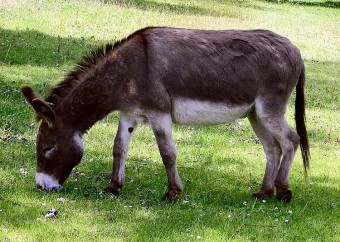 So, the main difference between a donkey, mule, and a horse is genetics. Horses have 64 chromosomes; donkeys have 62, leaving the mule and hinny with 63. This mismatch in pairs leaves the mule and hinny almost always sterile, though there have been about 60 recorded instances of a female mule able to conceive with a horse or donkey.

Beyond the genetic difference, you can easily tell the difference between a donkey and a mule or hinny by a few different physical markers. The easiest thing to spot is that mules and hinnys are usually larger than donkeys (often significantly so), much more closely resembling a horse in size.  In fact, it’s not that uncommon for a mule to be taller than both its donkey father and horse mother.

Less noticeable at a glance is that donkeys lack the fifth lumbar vertebrae in their spine which horses and most mules possess.

Besides physical and genetic differences between a mule and a donkey, you can also tell the difference just by hearing them make noises.  Donkeys make very distinctive hee-haw type sounds. Mules make a sound that is something of a cross between a horse’s whinny and the donkey’s hee-haw, often starting as a whinny and melding into a hee-haw.