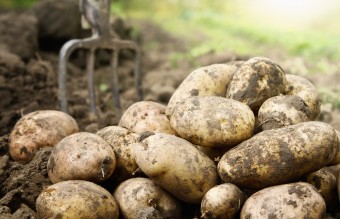 Among other definitions, a “spud” is a “sharp, narrow spade” used to dig up large rooted plants.  Around the mid-19th century (first documented reference in 1845 in New Zealand), this implement of destruction began lending its name to one of the things it was often used to dig up, namely potatoes.  This caught on throughout the English speaking world and this slang term for a potato is still common to this day.

A false origin of how potatoes first began being called “spuds” you might often read is that it came from the 19th century group “The Society for the Prevention of an Unwholesome Diet” (SPUD), who among other things felt potatoes shouldn’t be eaten.  Previous to the mid-20th century, while abbreviations were prevalent in text, pronouncing them as words was not something people typically did, being something of a very modern phenomenon. In fact, according to linguist David Wilton, “There is only one known pre-twentieth-century [English] word with an acronymic origin and it was in vogue for only a short time in 1886. The word is “colinderies” or “colinda”, an acronym for the Colonial and Indian Exposition held in London in that year.”

No surprise then that the word “acronym” didn’t pop up until 1943.

Beyond referring to potatoes, the ultimate origin of the word “spud” isn’t known, first showing up in English around 1440 referring to a short dagger, possibly from the Dutch “spyd”, the Old Norse “spjot” (spear), or the Latin “spad-” (sword).  Whatever the case, after the 15th century, the word expanded from meaning “a short dagger” to also referring to various types of digging implements and eventually to those tubers we all know and love, potatoes.

Interestingly, when potatoes were first introduced to Europe, they met with a lot of resistance for a variety of reasons, from people thinking they were poisonous to people refusing to eat them because they weren’t mentioned anywhere in the Bible.  Read more about this in “The History of French Fries” link below.