Why are There No B Batteries? 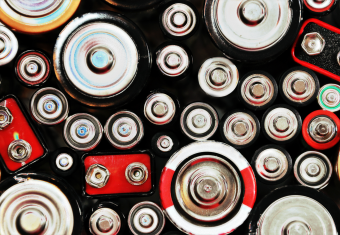 There actually are B batteries, but they aren’t something you’ll usually see stocked at most stores any longer.  Since the invention of the battery, there have been a pretty amazingly diverse number of battery types used with different sizes/shapes/voltages/storage capacities/etc., and also named a variety of things.   This gave rise to the need for an industry wide standard, particularly as the lack of an international or even national standard during WWI was problematic for the military.

As such, after WWI, the War Industries Board and several other government agencies got together to try to come up with standard specifications for batteries.  A few years later, in 1928, the American Standards Association, the predecessor to the American National Standards Institute (ANSI), officially adopted this proposal, introducing  a list of battery cell sizes and their corresponding label.  For these labels, they used the suggested convention that A would be the smallest; as you went up in the letters, the batteries would get larger in size.  There was also a “No. 6” battery that was the largest. This was just adopted as it had previously been one of the most popular battery cell sizes used (a 6 inch battery), so it was grandfathered in, though now given more strict guidelines to its exact specifications.  Others came along later, such as the AAA size, which wasn’t adopted into the standard until 1959.  Since then, the ANSI standard for batteries has been revised numerous times as battery technology has evolved.

Why it appears there is no B (or A, F, etc.) anymore is simply because those particular battery sizes never really caught on commercially, at least on the consumer end of things.  The ones that were most popular just ended up being the AA, AAA, C, and D.  Now-a-days, because those are the most commonly available to consumers, most manufactures continue to use those battery types over the many other sizes that are available to power their devices.  However, B batteries are still made and sold and pack a decent punch for their size, 21.5 mm x 60 mm (.8464 in. by 2.36 in.), producing 1.5 volts and 8350 mAh for the alkaline variety. (For reference, standard alkaline AA’s ring in at 1.5 volts and 2700 mAh).   ‘A’ batteries are also still in production,  last most commonly used in early-model laptop battery packs.  F batteries, on the other hand, are still commonly used within something you can find at your local supermarket- rectangular 6 volt batteries.