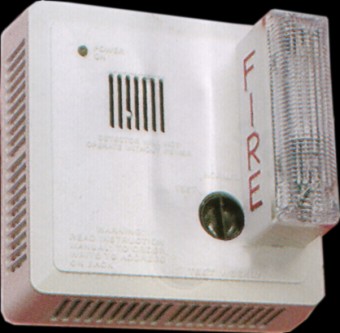 Today I found out how a smoke alarm works.

At their core, smoke alarms are very simple devices that need only two functions: a way of detecting smoke and a way of alerting people to the problem. From new technology involving lasers to old world technology that relies on a lonely individual sitting in a tower on the side of a mountain just waiting to see smoke, all do the same thing in different ways. The two most commonly used smoke alarms (mainly because they are inexpensive) are photoelectric and ionization detector alarms. The difference between the two lies in how they detect smoke particles. Depending on the conditions of the fire, one type is usually better than the other. Many other kinds of detectors exist that are more expensive and often situation specific (such as needing to protect classified documents or computer servers). These tend to be much more sensitive and allow for many different levels of detection and alarm. The most common of these is aspiration detectors.

Photoelectric detectors use a beam of light sent from a light-emitting diode (LED) that is detected by a photocell.  There is a common misconception that the photocell receives light at all times from the LED, and when smoke gets in the way, the alarm is triggered (similar to the way a door alarm at convenience stores often works). This misconception ignores one glaring problem. It would require a large amount of smoke to block the light from the photocell, making it extremely insensitive. A person would be dead from smoke inhalation long before the detector would ever go off. At least the neighbors would be alerted to the fact that a dead body is about to be burned up! (Free cremation for you that want to be frugal, even in death!)

What is actually happening in the photoelectric fire alarms is the LED sends a beam of light, usually down a T-shaped chamber. Sitting at the bottom of the T is the photocell. When smoke enters the chamber, some of the light is scattered by the particles, with some of the rays getting sent down to the photocell. When this photocell detects light, it generates an electrical current that triggers the alarm at a certain threshold. Once that current stops (the smoke is cleared) the alarm will stop. Photoelectric detectors are better at detecting slow, smoldering, and therefore generally smokier, fires.

Ionization detectors use ionizing radiation from a material known as Americium-241. Ionizing radiation is simply radiation from substances that can free electrons from an atom or molecule, the net result being ions that have a specific electric charge of either positive or negative. The detectors use a small amount of Americium-241 contained in a small chamber. This chamber is made up of two oppositely charged metal plates that are kept a small distance apart. When the particles (alpha particles) interact with the air in the chamber, they produce ions. The positively charged plate attracts the negative ions, and the negatively charged plate attracts the positive ions. This system creates a small electric current. When smoke enters the chamber, the particles attach themselves to the charged ions and restore them back to a neutral electrical state. This disrupts the electric current and an alarm is triggered. Hot air can also change the rate at which ionization occurs within the chamber and this will also trigger the alarm. Ionization detectors are much more common than photoelectric detectors because they are less expensive and better at detecting smaller amounts of smoke that come from fast flaming fires.

If you’re worried about your house having “nuclear radiation” in it, don’t. The small amount of radiation found in the detector is practically harmless, being predominantly alpha radiation. This type cannot even penetrate a piece of paper and is blocked by just several centimeters of air. The only danger comes from if you inhale the particles. So no taking apart the ionization chamber and huffing the air in it to try to develop superpowers.  Lung tissue damage, increasing your risk of lung cancer, and other such health problems may not be the superpower you were hoping for.  Plus the superhero name “Wheezy” won’t exactly instill fear on the hearts of evil doers the world over.

The differing strengths of these two main types of sensors has led to the creation of detectors that employ both types of systems. This allows for the rapid detection of both small smoldering fires, and fast moving ones.

The less common Aspirating smoke detectors use a fan to draw in air from the surrounding environment; next, a system of filtering, sensing, and analyzing the air sample is employed. Depending on the environment needing protection, this system can be as sensitive (some as much as 1,000 times as much as a standard photoelectric or ionization detector) or advanced as the situation requires. Should the system detect any type of negative environment, such as very small amounts of smoke, small changes in temperature, or flickering light (as from a flame) it can notify appropriate personnel in many different ways. Multiple levels of warning can trigger different responses depending on the stage of the fire, from simply notifying personnel of a pending problem to communicating with a fire alarm control panel to adjust air conditioning or release different types of fire suppressing agents, or all of the above. So if you need to protect your complete collection of Playboy magazines, you might want to spend the extra money and purchase one of these systems. No one wants their December 1953 edition, featuring the lovely Ms. Monroe, to be the thing creating the smoke for your piece of crap photoelectric detector!