The Origin of the Green, Yellow, and Red Color Scheme for Traffic Lights 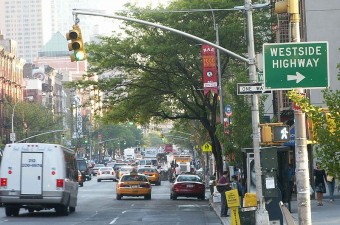 Today I found out the origin of the green, yellow, and red color scheme for traffic lights.

While some of the specifics have been lost to history, it is known that this color scheme derives from a system used by the railroad industry since the 1830s. At this time, railroad companies developed a lighted means to let train engineers know when to stop or go, with different lighted colors representing different actions.  They chose red as the color for stop, it is thought, because red has for centuries been used to indicate danger. For the other colors, they chose white as the color for go and green as the color for caution.

The choice of a white light for go turned out to cause a lot of problems. For instance, in an incident in 1914 a red lens fell out of its holder leaving the white light behind it exposed. This ended with a train running a “stop” signal and crashing into another train. Thus, the railroad decided to change it so the green light meant go and a caution “yellow” was chosen, primarily because the color is so distinct from the other two colors used.

So how did this system transfer to the road?  In London, England in 1865 there was a growing concern over the amount of horse-drawn traffic causing danger to pedestrians trying to cross the roads. A railway manager and engineer named John Peake Knight, who specialized in designing signaling systems for the British railway, approached the Metropolitan Police with the idea of using a semaphore/lighted system for road traffic.  In the daytime, this semaphore method used an arm or arms that could be raised or lowered by a police officer, notifying carriages when they should stop when the arm(s) stuck out sideways.  At night, his system used the red and green colors for stop and go. 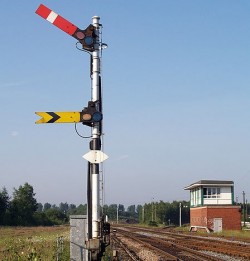 His proposal was accepted and, on December 10, 1868, the system was put in place at the junction of Great George and Bridge Street in London, near Parliament. The system worked extremely well… for about a month. That’s when one of the gas lines that supplied the lights began to leak. Unfortunately, the policeman who was operating the arm was unaware of the leak and ended up being severely burned when the lamp exploded. Thus, despite its early success, the semaphore traffic system was immediately dropped in England.

On the other side of the pond, signaling traffic in the United States also used policemen as it was thought that people would not follow a set of rules unless there was some form of law enforcement present. Towers that allowed officers a better view of the traffic became commonplace in the 1910s and 1920s. During this time, officers could either use lights (usually red and green after the railroad system), semaphores, or simply just wave their arms to let traffic know when to stop or go.

In 1920 in Detroit Michigan, a policeman named William L. Potts invented the four-way, three-color traffic signal using all three of the colors now used in the railroad system. Thus, Detroit became the first to use the red, green, and yellow lights to control road traffic.  Many inventors continued to come up with different designs for traffic signals, some adopting the red, yellow, green color scheme and some not. Most usually needed a person to push a button or flip a switch to change the light. As you might expect, this man-power intensive way to change the lights proved costly.

In the late 1920s, several “automatic” signals were invented. The first ones used the simple method of changing the lights at specific timed intervals. However, this had the drawback of having some vehicles stopped when there were no cars going in the other direction. An inventor named Charles Adler Jr. had an idea to get around this problem. He invented a signal that could detect a vehicle’s horn honking. A microphone was mounted on a pole at the intersection and once the vehicle stopped, all they need do is honk their horn and the light would change. To keep people from continually honking to get the light to change, and thus causing havoc, once the light was tripped, it wouldn’t change again for 10 seconds, allowing at least one car to get through.  Presumably people walking by and living in nearby homes and businesses were not fond of this system.

A less annoying automatic signal was invented by Henry A. Haugh. This system used two metal strips that sensed pressure. When a passing car pushed the two strips together, the light would soon change to allow that car to go.

All of these different types of lighting systems began to present a problem. Drivers could drive through different areas and encounter several different types of systems, causing confusion and frustration. Thus, in 1935, the Federal Highway Administration created “The Manual on Uniform Traffic Control Devices.” This document finally set uniform standards for all traffic signals, road signs, and pavement markings- pertinent to the topic at hand, on the traffic signal front, it required using the red, yellow, green light indicators.