Honey can be Used for a Variety of Medicinal Purposes 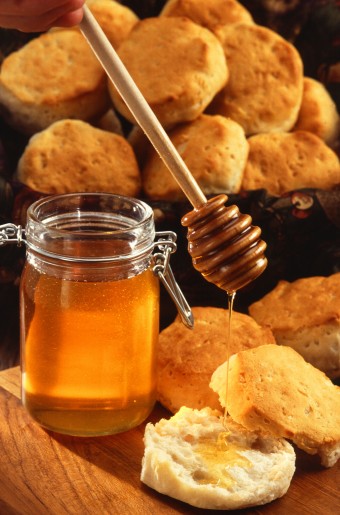 Today I found out honey can be used for a variety of medicinal purposes.

You may be skeptical about this because many such “natural” alternatives to medicine put forth are not backed by any scientific research. These types of claims are often based primarily on anecdotal evidence, which can be misleading.  (I personally was extremely skeptical about honey’s medicinal value, as you can read at the bottom of this article.)  However, it turns out there are clear scientific reasons behind why honey works so well as a treatment for a variety of maladies and there have been numerous studies showing just how effective it is compared to certain synthetic pharmaceuticals.

From ancient Greece to current underdeveloped countries in Africa, honey has been a sought-after healing agent to treat a wide range of afflictions. Aristotle in 350BC recommended the use of several different types of honey to treat different ailments. Despite being used throughout recorded history, only recently have honey’s medicinal effects been studied in a scientific manner.

One of the most important attributes of raw honey in this context is that it possesses inherent antibacterial properties. This makes it particularly useful in treating burns, peptic ulcers, gastroenteritis, and infections.  This latter usefulness in treating infections is particularly important given the growing resistance to current antibiotics many microbes are developing.

The properties that make honey such a potent antibacterial agent are high viscosity; low pH; high osmolarity with low availability of free water; and its natural ability to produce hydrogen peroxide.  It should be noted that certain types of honey have been shown to work better than others. For instance, Manuka honey (honey made from bees pollinating the Manuka tree) has been shown to inhibit the growth of more types of bacteria than many other types of honey. Since it is known that different types of honey have different antibacterial capabilities, honey is now being classified with what is known as its “Inhibine factor,” rating its antimicrobial efficacy.

Honey inhibits bacterial growth by stopping it at the cellular level. Staphylococcal forms of bacteria are some of the most common present in wounds. They are also proving to be some of the hardest to kill. Many types of this bacteria have grown resistant to Methicillin, one of the most common classes of antibiotics. When these bacteria clump together, they form a barrier known as a biofilm. Current antibiotics have a very difficult time penetrating these biofilms. Honey, on the other hand, seems to prevent these biofilms from forming. In addition, when already present, it has been shown to still be able to kill up to 85% of the microbes, despite the biofilm. The reason for this seems to be that it prevents the bacteria from clinging to human fibronectin. Fibronectin is a protein on the surface of any damaged cell, such as a burned or ulcerated cell.

Honey also generally has a pH value between 3.2- 4.5, making it a very acidic agent. Most bacteria need a less acidic environment to propagate and thrive. For example, E. coli, Salmonella, and Streptococci all need a pH environment of 4 – 4.5 to flourish. Thus, most types of honey will inhibit growth of these common pathogens.

In addition to that, honey has a low availability of water for bacteria to use, being about 84% fructose and glucose. The 15-21% of water by weight in honey strongly interacts with the sugar molecules and, thus, there is very little left available for anything else (like bacteria). This free water, known as the water activity or “aw“, is measured between 5.6-6.2 for most types of honey. For reference, bacteria can have their growth completely inhibited with an aw of 9.4-9.9.

Honey also has an enzyme, glucose-oxidase, that produces hydrogen peroxide, particularly during its ripening stages, with the production stopping once the pH drops low enough. That being said, fully ripened honey has a pretty low level of hydrogen peroxide. However, should you dilute the honey in water, this enzyme’s activity increases by a factor of up to 50,000, making it a very effective slow release antiseptic. This “slow release” effect is particularly helpful as it does not damage healthy tissue, which a high dose of hydrogen peroxide will do (even able to destroy newly formed skin cells, which is the opposite of helpful).  Rather, these slow release, low doses kill only the germs, while leaving the healthy tissue unharmed.  Properly prepared (see Bonus Facts below), this makes a honey/water solution ideal for treating eye infections.

In the general case, though, diluting honey and taking advantage of its hydrogen peroxide production will get rid of many of the other antibacterial properties; so usually it’s better to use pure honey, rather than diluted.  Specifically, diluting honey will change its pH and it’s aw values. If you choose to dilute the honey, with say, water, then its pH and free-water levels will rise to the point that they won’t inhibit microbial growth and you’ll have to rely more on the increased hydrogen peroxide production to prevent infection.

Finally, honey also generally has the effect of reducing pain on burns and open wounds because it prevents air from reaching the wounded area.  Further, it has been shown to reduce scarring due to stimulating skin regrowth.  Another great side-benefit to using honey to treat burns and cuts is that a bandage used after honey is fully applied to a wounded area won’t stick to the wound when removed.

Honey works so well as an antimicrobial agent that it has been beating its synthetic counterparts quite handily in recent scientific studies. For instance, one study comparing the application of honey over common burn treatment agent (silver-sulphadiazine) showed the following: of the burn patients treated with topical honey, 90% of them were microbe-free on the burn after 7 days. Of the patients treated with silver-sulphadiazine, 84% of them not only had positive signs of bacteria, but they also all showed persistent signs of infection. The study concluded that honey made wounds sterile in less time, reduced the chance of scars and post-burn contractures, and drastically enhanced healing overall, compared to the silver-sulpha.

Honey’s many healing properties haven’t been lost on one Dr. Peter Molan who has created a synthetic rubber-like material that supposedly mimics all the benefits of Manuka honey, but without the main drawback of the initial stickiness. The $6 billion global market on wound care treatment, combined with the ever increasing resistance various microbial strains are developing against common Methicillin based drugs, no doubt has been a powerful motivator in the development of a synthetic alternative to honey for pharmaceutical companies to sell. Time and further studies will show whether Dr. Molan’s new material will be just as effective (and as cheap.)

One place honey is beginning to be used in the professional medical field is in the cancer ward of Bonn University Children’s Clinic in Germany.  What they use there is something called medihoney, which is basically just raw honey that is subjected to regular quality control tests. Cancer patients are particularly vulnerable to infection and other complications due to many of the treatments for cancer inhibiting the body’s natural wound healing ability.  As Dr. Simon, who works there, stated, “Normally a skin injury heals in a week, with our children it often takes a month or more.”  What they’ve found is that the use of honey causes “dead tissue [to be] rejected faster, and the wounds heal more rapidly…  What is more, changing dressings is less painful, since the poultices are easier to remove without damaging the newly formed layers of skin.  Even wounds which consistently refused to heal for years can, in our experience, be brought under control with medihoney – and this frequently happens within a few weeks.”  Honey also reduces the foul odor that some wounds can produce.

*Note: Store-bought honey is typically highly processed and as a result loses much of its effectiveness for medicinal purposes.  As such, when using honey as a medicinal agent, you should always use raw, unprocessed honey, which can usually be found at farmers markets, fruit stands, and the like.

*This article is dedicated to my dad who has whiled away many years in one of the poorest regions of Africa where honey has proven to be extremely effective in treating a variety of ailments.  As such, he has continually argued with me over the benefits of honey in the treatment of various afflictions, particularly burns. The crow that I will surely eat for taking an opposing opinion, I can only hope will be lessened by the fact that writing this article is a complete acknowledgment that I with all my medical training  and experience was incorrect, while he was not! (This time.)

*Legal Disclaimer: While I am a paramedic, I am not a doctor and more importantly I am not your doctor.  This article contains general information about medical conditions and treatments. The information is not advice, and should not be treated as such. You should never delay seeking medical advice, disregard medical advice, or discontinue medical treatment because of information in this article…. There, I’ve covered myself.