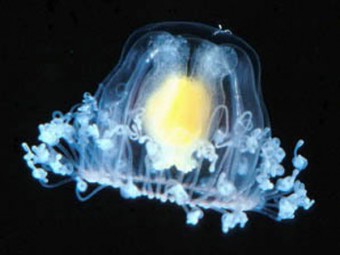 Today I found out there is a species of jellyfish that can age both forwards and backwards, making them theoretically immortal.

Most jellyfish have a lifespan of between a few hours to a few months, though a few varieties can live for several years.  The king of them all in terms of biological lifespan is the Turritopsis Nutricula which can potentially live forever.  They can grow old like every other living thing, but then have the unique ability to reverse this process and grow young again.  Of course, their bid for immortality is hindered by the fact that they only grow to a maximum of around 1/5 of an inch in diameter on their bell, so they are easy prey for many animals.  However, in theory, they can live forever; the only known living thing to be able to achieve this.

The Turritopsis Nutricula begins life much like most jellyfish.  The male jelly will release its sperm into the water and it may unite with the egg of a female jelly.  Eventually this will produce planulae (free swimming larva) that leaves the body of the female jelly and float around until finally settling on the sea floor and attaching to something sturdy like a rock.  It then forms into a stationary polyp that will eventually look like a plant.  This polyp feeds on various things like plankton and over time a colony of polyps will form from the single polyp, all connected via feeding tubes.  At a certain point, sometimes even years later, the colony of polyps will begin producing free swimming jellyfish.

Also like most jellyfish, the Turritopsis Nutricula, once they’re formed into jellyfish, float away with the currents, gathering food as they encounter it.  The real miracle of the Turritopsis Nutricula, though, is what happens when food is scarce or they are injured or various other environmental queues occur.  These events will trigger a unique mechanism within the Turritopsis Nutricula that causes it to begin to grow younger via transdifferentiation, where their cells are able to change themselves into a new cell.  They continue to grow young all the way to the point where they once again become a single polyp, starting the process all over again.  They will then remain a polyp for a time, even able to grow a new colony.  Once again, at a certain point, free floating jellyfish form and are released from the polyp colony, each with the same genetic code as the original jellyfish that formed the polyp.  It is thought that this process can go on without end, assuming the resultant jellyfish don’t die of some disease or aren’t killed by some predator.  This effectively makes this tiny jellyfish biologically immortal.