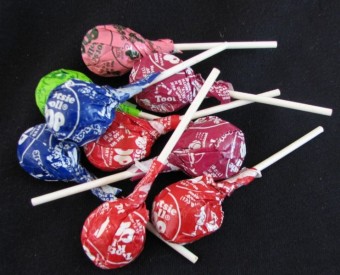 Myth: Tootsie Roll Industries used to give away prizes if the wrapper of a tootsie roll pop had a Native American boy shooting a star.

Children all over the world have whipped wrappers off of the beloved Tootsie Pop lollipop searching for an Indian boy shooting a star in hopes of obtaining a free Tootsie Pop. Turns out, even though this rumor has been around for over sixty years, Tootsie Roll Industries never endorsed such a prize or contest. Tootsie Roll Industries themselves have the following to say about this rumor: “Many years ago, a rumor surfaced that said if the wrapper of a Tootsie Pop with a star was found and returned to the company, a free Tootsie Pop, or any number of things would be sent to the lucky person. We truly don’t know why or where this rumor started, as our records do not indicate that our company ever sponsored any type of promotion surrounding images on the wrapper.”

Due to the fact that that the Native American boy shooting the star appears on about 1/3 of the wrappers, it would significantly cut into their profits if they decided to do this.  Although Tootsie Roll Industries doesn’t endorse this, some individual stores have occasionally honored the infamous rumor and awarded children with a free Tootsie Pop if they brought in a star-imprinted wrapper.  This is thought to have been largely why the rumor has continued to be perpetuated, even to this day.  It also may be how the rumor got started in the first place with some single store starting this promotion on their own, with people thinking it was Tootsie Roll Industries doing it, meaning you could trade in the wrappers at any store.