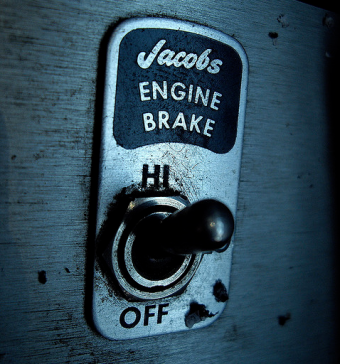 Today I found out how a Jake Brake works (also known as “Jacobs Engine Brake” or “compression release brake”). For those who don’t know, a “Jake Brake” is what makes that machine-gun like noise that you might hear from semi-trucks when they head down long steep hills.

A normal gas motor uses the air flow from the intake manifold to control air/fuel mixture.  This air is provided to the motor’s cylinders and the air/fuel mixture greatly affects how much power you get out of them. When the throttle is closed (you take your foot off the gas), the airflow is significantly restricted.  It is the work that your engine has to do against this restricted air flow that provides the braking, sort of like a vacuum pump. This braking effect remains as long as your car wheels remain connected to your motor. Should you engage the clutch, the braking effect of the engine will no longer help you and your car will be coasting down the hill at the force we are currently calling gravity’s whim! The braking force provided by the restricted airflow in this case will vary depending on the engine and what gear your car is in.

A diesel motor, on the other hand, has no such similar air restriction device. The diesel motor also does not have a spark plug to ignite the fuel contents. Instead, they use air compression and the heat created by it, to ignite the fuel. When the fuel is shut off to control power (taking your foot off the gas) and you haven’t engaged the clutch, the crankshaft still turns due to the wheels still spinning from the vehicles forward momentum.  This continues the process of drawing air into the cylinders, which is then compressed by the pistons as they move back up.  Even though there is little or no fuel to ignite in the cylinder, the compressed air still provides something of a spring-back effect on the piston, pushing it back down.  This provides a boost in efficiency, in that this process utilizes some of the energy used to compress the air, even without ignition in the cylinder.  While this is more efficient, it turns out to not be helpful when you want to try to use the engine to help slow the vehicle down.

The Jake Brake works by releasing the stored compressed air before it can have a chance to spring back the piston.  Basically, an extra nob, or lobe, is added to the camshaft that opens an added exhaust valve, which then releases all of the stored compressed energy out into the atmosphere, assuming the compression brake was engaged. When the compression brake is not engaged, the mechanism controlling the valve allows it to stay closed, even though the camshaft is still turning (using a telescoping stem that can be locked or unlocked).  The energy required to compress the air, which is then released before it can be used to help slightly power the down-stroke, then has the effect of slowing the vehicle down as the air is compressed.

Mr. Cummins had prior contractual arrangements with the Cummins Engine Company, so he first attempted to market his idea to them. They unwisely turned him down. The novelty of the idea and the combined factors of an untried mechanical system and the uncertainty of its commercial merit, prompted all of the other manufacturers who used three cam diesel engines to also turned him down.