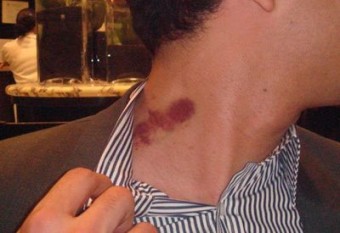 Today I found out what causes hickeys, that infamous badge of shame that requires most teenage boys to seriously consider buying make up to cover their necks before they go home to mom and dad! Now I know what your thinking, your partner in sadism causes those of course! While this may be true, the underlying factors that allow this mark of coital nourishment to show up are really quite interesting.

The Dermis is a much more exciting, and active, layer of the skin. It houses blood vessels, sweat glands, hair follicles, lymph vessels, and the receptors for pain and touch. This layer is held together by a protein called collagen. This collagen is in turn made from cells called fibroblasts and is what gives the skin it’s strength.

The Subcutaneous layer is where all your fat hides, or not, depending on how many cheeseburgers you like to consume. This layer is what helps hold in all the body heat and provide a nice defensive cushion for those all important organs. So depending on the size of your subcutaneous layer, you might just have the best protected organs known to man! Unless of course, you count the heart disease, then maybe not!

So what is going on with the infamous mark of the passion known as a hickey? When the small blood vessels in the dermis, known as capillaries, get broken they begin to bleed in to the small spaces below the epidermis called interstitial space. This bleeding forms a bruise in the shape of you or your companions mouth. The size and scope of the hickey will depend on the negative pounds per square inch your hoover-like mouth can create, or the strength of the bite given. The greater the negative force or bite, the more bleeding that will occur and the bigger the hickey will be.

As any teenager might tell you, hickey injuries themselves tend to be very minor, usually just resulting in either snickering from others or a lecture and an STD test by your parents. But before you go out and start branding consenting lovers, be warned. In 2010, a 44 year old New Zealand women was partially paralyzed by a blood clot that caused a small stroke. Being treated at the Middlemore Hospital in Auckland, her doctors performed and extensive exam as to the cause of her stroke and found it was the result of a hickey. The hickey was over the top of a major artery and as a result of the trauma caused by the love bruise, a small blood clot formed in the artery.  This traveled through her heart and into her brain causing a stroke.

Extreme injuries like a stroke are rare in hickey cases. For this reason, treatment mirrors that of any other bruise. Applying ice and or direct pressure to the affected area just after injury will help reduce the bleeding and size of the hickey. (Although immediate ice application might not be the best choice given the cause of the hickey, as this could definitely have an effect on further hickey making.) While an absolute cure for a hickey might seem to be the use of a band-aid or turtleneck, most any priest, or overly protective parent, will tell you abstinence is the best medicine!