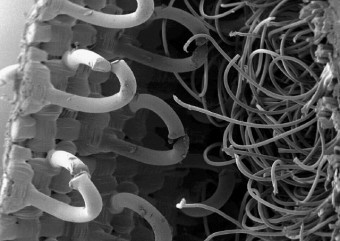 Today I found out Velcro was modeled after burrs of the burdock plant that stuck to Velcro’s creator’s pants after a hunting trip.

The inventor of Velcro, more generically known as a “hook and loop fastener” or “touch fastener” as “Velcro” is technically just a brand of that product, was Swiss engineer, Georges de Mestral.  After going out on a hunting trip with his dog in the Swiss Alps, his pant legs and his dog’s hair were covered in burrs from the burdock plant.  As an engineer, he naturally began to wonder how exactly the seeds stuck so effectively to his pants and his dog.  He then examined the burrs under a microscope and discovered that they had very tiny hooks which allowed the seeds to catch on to things like fabrics, which have tiny loops.

Hook and loop fasteners have been common for hundreds of years, but up this point no one had ever made a hook and loop fastener on the tiny scale of these burdock plant burrs.  Not to be deterred by the difficulty in making hooks that small, de Mestral then set about trying to replicate these hooks to try to make a material that could easily “stick” and be removed, principally initially having in mind creating a “zipperless zipper”. 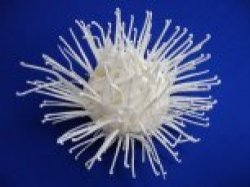 His first prototype for Velcro was using two cotton strips, with one of the strips having hundreds of randomly situated tiny hooks embedded.  The random placement would allow the hooks to be more likely to find a loop in the fabric with the loops also randomly sewn in.  This worked well at first, but the cotton hooks didn’t stand up over many detachments.  After developing many different methods for creating the tiny hooks and loops, he eventually found that heat treated nylon worked best for his product, being very durable, and that he could more easily create the hooks by simply making both sides of the material with the loops, then cutting the tops off the loops.

Even though he now had a durable way to mimic the tiny hooks/loop sticking mechanism of the burdock seeds, he still had no way to mass produce Velcro.  It took another ten years before he finally invented a loom that could automatically weave the nylon appropriately and then trim the loops.  His hard work paid off though with Velcro’s popularity skyrocketing within just a few years of de Mestral being granted a patent for his “zipperless zipper” in 1955.