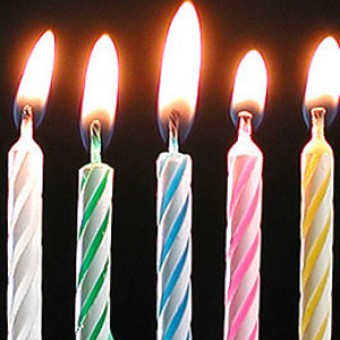 Today I found out how trick candles work. There is nothing more humorous then seeing a person become woozy and light-headed at a feeble attempt to blow out candles that fight back!

Candles themselves work on a fairly simple and ingenious principle. The three elements to sustain fire are concealed in one convenient package. The fuel itself is the container made of wax. The catalyst that heats up the fuel is the wick. Once lit, the wax that is surrounding the flame melts and is drawn into, and up the super absorbent wick. The closer the wax gets to the flame, the hotter it becomes. By the time it reaches the flame, it is hot enough that the wax vaporizes and it is the wax vapor that burns. The oxygen it needs is ever present in the air at approximately 21%.

There are several types of waxes used to make different types of candles. The most popular are; Paraffin, Beeswax, Tallow, Bayberry, and Soy. Because it is a byproduct of crude oil and can be manufactured to have several different melting temperatures, often at lower costs, the most commonly used type candle wax is paraffin. Low melting paraffin has a melting point at or below 130 degrees Fahrenheit. Medium melting point paraffin melts between 130-145 degrees, and high melting point paraffin melts between 145 and 150 degrees. The higher the melting point of paraffin, the harder and longer lasting the candle wax is. Almost all trick candles are paraffin wax candles.

So why is it so hard to blow out a trick candle? When you blow out a normal candle, there is a small ember inside the wick itself that continues to burn. This ember is hot enough to melt the wax, but not hot enough to ignite the vapor and continue the burning process. This ember simply cools and the candle goes out completely. In trick candles however, they add an ingredient that ignites at a lower temperature then the paraffin wax. This ingredient is usually a pyrophoric metal.  These metals are metals that ignite at extremely low temperatures.

Magnesium is the most commonly used pyrophoric metal in trick candles, with the magnesium flakes embedded in the wicks. When you blow out the candle, the ember that remains is hot enough to light off the magnesium (needing only to be around 800 degrees Fahrenheit). When that magnesium burns, it burns so rapidly and at high enough temperatures that the paraffin wax vaporizes and ignites and the burning process continues.

The obvious question then comes up. Why doesn’t all the magnesium in the wick light off when the trick candle is burning normally. The answer lies in how quickly the magnesium burns and how much oxygen is required to allow that process to occur. As the trick candle burns normally, the wick is cooled by the liquid paraffin wax. (similar to the way you can hold a paper cup full of water above a fire and the cup will not burn, because the water cools the cup) The barrier that the wax creates between the magnesium in the wick and the air also helps to keep the magnesium from lighting. But once the candle is blown out, the wick is exposed to the ember and more air, and voila! Fun for everyone, except asthmatics!