How a Heart Attack Works 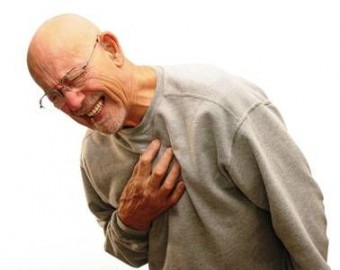 Today I found out what exactly is going on with the heart during a heart attack.

We’ve all seen the 70 year old man on TV who suddenly clutches his chest and yells “Oh, my chest!!” and then falls over dead.  Seems like a relatively easy way to die, certainly better than massive burns over your body then dying three days later in the hospital of an infection.  So what is going on in the chest when the heart attack occurs?  What is causing the pain?  Is that truly the behavior of someone experiencing an authentic heart attack?

Let’s start with how the heart works (for a more detailed explanation, see Today I Found Out’s article “How The Heart Works”). To make a long story short, the heart is a four chambered pump that supplies oxygen rich blood to the body and to itself.  The four chambers fill in sequence with blood, which is then circulated throughout the body (this may sound simple but is actually an elegantly choreographed muscle ballet, steady, graceful and smooth; when the heart beats a syncopated jazz rhythm, usually you’re toast). This wonder of an organ is operated by a two part biological system,  wires and plumbing.  The wires provide a mini-shock created by electrolytes like sodium and potassium.  This shock goes down through the heart and causes it to contract.  The arteries are the plumbing.   A heart attack happens when the plumbing no longer works appropriately and blood flow to the heart is interrupted for some reason.

The heart muscle itself is not fed by the blood within its chambers.   Instead, this (hopefully) never ceasing muscle has its own special supply line called the coronary arteries.   Unlike normal arteries that have blood move through them when the heart contracts (called systole), the heart gets supplied its blood when it relaxes (called diastole).  Should these plumbing pipes of blood supply get clogged or break open for some reason, the blood can no longer reach the part of the organ that it nourishes.

When a clot, called an embolus, travels into the coronary arteries, it travels down the pipe until it exceeds the size of the artery and clogs the artery from that point on (again, think stopped up plumbing…they say fiber is good for your heart as well as your colon). Emboli can come from several different sources.  The plaque (cholesterol) attached to the inside of your arteries can become dislodged and form an embolus.  Blood clots from around the body can travel into your coronary arteries and create the clog.  In very rare cases, there can be a foreign object that gets in to your blood stream and causes the stoppage of blood flow.

Blood clots themselves can come from several different sources.  Certain heart conditions, like atrial fibrillation or atrial flutter, are known to create blood clots.  Sitting down for long periods of time, such as on a long plane ride, can cause blood clots to form in your legs that can travel into your heart.  Whatever the cause of the embolus, the problem is the same,  clogged pipes!

The other way your arteries can cease to provide blood to the necessary parts of your ticker is when those pipes break open and spill their contents (blood).  This unfortunate scenario can also be the result of several different causes.  For instance, high blood pressure can exceed the breaking point of the artery.  The artery walls themselves can become weak and form an aneurysm that can break open (sort of like a garden hose with a bulge in it).

The last thing that can cause blood to stop flowing downstream is when the coronary arteries spontaneously spasm.   This causes the artery to collapse on and off, restricting blood flow.  While this can happen at rest and in people without any significant cardiac problems, the most common cause is drug related (stay away from the coke, Farley!). Once the blood stops reaching the tissue, the painful process of ischemia (tissue death from oxygen starvation) sets in.

Whatever the cause — clot, rupture, or vasospasm —  the result is the same: no blood gets to the heart muscle and you will need a special plumber to fix it,  a really expensive one if you are in the United States. Just look for the guy with no people skills, lots of money, and the smallest plumbing snake you’ve ever seen!  Bingo, you’ve won yourself an awkward last minute blind date with a cardiologist. Don’t worry, he probably didn’t have anything better to do anyway, but he will still charge extra for evenings and weekends.

Some common symptoms that might be a sign that you are having a heart attack are: chest pain; chest pressure, as if someone was sitting on your chest; shortness of breath; nausea; vomiting; and sweating not caused by apparent heat or physical activity.  If you have any of these symptoms for longer than 30 minutes and they are not relieved with rest, it might behoove you to call an ambulance.

Just because you have these symptoms, however, does not necessarily mean you are having a heart attack.  There are numerous other cardiac conditions that can cause these afflictions; for instance, things like stable and unstable angina.  These cause temporary decrease in oxygen supply to the heart and subsequent pain because of it, but are distinguished from a heart attack due to being caused by insufficient blood supply, not a complete lack of it. There are also many other non-cardiac related causes for these symptoms.  Due to this, should you have these symptoms, professional help is the best way to go.  Neither Grandma’s chicken noodle soup nor freely applied Windex will cure the problem and the risk is too great to simply try to wait it out.