Dick Cheney Likely Doesn’t Have a Pulse, No Really 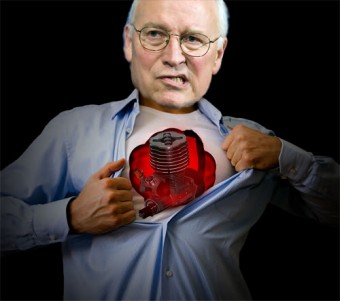 Today I found out that Dick Cheney likely doesn’t have a pulse. No, really! Dick has had several heart attacks since 1978. These heart attacks have made his heart extremely weak and he is currently in need of a new one. Technology has advanced to the point that we, as humans, have invented several mechanical devices that can help our heart beat should it want to stop doing its job. One of these devices is called a Left Ventricular Assist Device (LVAD). A nuance of one of these devices is that the person with it does not generally have a pulse. In July of 2010, Dick’s condition became such that one of these devices, specifically The HeartMate 2, was implanted in his chest.

Cheney has had a bad ticker since his first heart attack in 1978 at only 37 years old. Cheney has had a total of 5 heart attacks that have left him in need of several different treatments just to keep his ticker ticking. In 1988, he had to have a coronary artery bypass surgery. After his 4th heart attack, he needed a stent placed, and in 2001 received an implantable cardioverter defibrillator. In 2007 and 2008, he had to have his heart shocked, (cardioverted), because of an extremely fast heart rate known as Atrial Fibrillation (see Dick jump). All the heart damage caused by his bouts with death have also left him with a diagnosis of congestive heart failure (CHF). It is because of this CHF that Cheney finally conceded to the democratic consensus that his heart was bad, and he needed a new one!

CHF is a condition in which the heart no longer pumps enough blood to the body to meet its needs. The heart is a 4 chambered pump and the chamber that is responsible for pushing blood to the body and all of its organs is the left ventricle (for a complete explanation on the heart, see Today I Found Outs articles “How the heart works” and “What a Heart Attack is”). When the left ventricle no longer pumps appropriately, and the other chambers do, blood and fluid begin to back up into the lungs, liver, GI tract, arms and legs. (see Dick swell up) In advanced cases, the decrease in blood flow becomes so great that the heart can no longer maintain the basic needs of the body, even at rest. Basically, the Left Ventricle is in a “Full Nelson” and taps out for good! When this happens, a person is in need of a new heart. Due to the overwhelming need for organs, people can wait on a list for sometimes years (see Dick wait). One treatment that will help them in this case is to use a LVAD.

A LVAD is basically an implantable mechanical pump that assists the left ventricle in pumping blood to the body. LVADs have been approved by the FDA since 1994 and currently there are several different options. (see Dick choose) The LVAD Cheney chose was the Heartmate II. It is designed to last longer due to the simplicity of only one moving part. One of the major differences between this model and older models, is the rotor that creates a constant flow of blood instead of the pumping action created by its predecessors, because of this it is also much lighter and quieter.

The HeartMate II has three parts: a rotor suspended by a magnet, an electronic controller, and a power supply. The entire pump is about 3 inches long and weighs about 10 ounces. Placed in the abdominal cavity, the LVAD takes blood from the left ventricle and pumps it into the aorta. Two external batteries supply the power for this pump. These batteries are connected to a pump via a cable that goes through the abdominal wall itself. They are carried in underarm holsters or a waist pack. The electrical controller is a small computer like component that adjusts functions of the pump, such as rotor speed. (see Dick’s heart race!)

These devices are so new, that there is limited research in to how long patients with these pumps should remain on them, and what their outcomes might be. What research is available happens to be very promising (see Dick smile). A series of HeartMate II studies have proven the viability of using LVADS as a bridge treatment to getting patients a heart transplant.

Pre-FDA approval studies showed that the 18 month follow up data on 281 patients showed improved survival, less frequent adverse events and greater reliability of the LVADS compared to pulsatile flow devices. Of the 281 patients, 157 had undergone transplant, 58 were still using the device, 7 had the LVAD removed because their heart recovered, and the 56 remaining were the unfortunates and had died. 56 might seem like a lot, but considering the alternative of certain death for all of them, 56 isn’t that bad! (see Dick approve)

Someone that requires 100% of their blood flow to be circulated by this appliance will indeed be completely without a heartbeat. This is due to the constant flow of blood from the machine instead of the rhythmic pumping of the heart. At the time Dick Cheney had his LVAD implanted, it was doing approximately 30-60 percent of his heart’s work. Because of this, it is very likely that should you check Dick for a pulse, you would not find one.

*Update: Dick Cheney has now controversially received a heart transplant (people his age rarely are given new hearts, hence the controversy).  In any event, so now he’s back to having a pulse! 🙂