August 25, 2011 Jon
Note: This is a guest article contributed by frequent TIFO visitor and owner of DumpADay, Jon. 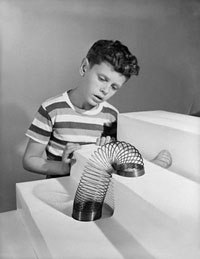 Today I found the Slinky was originally intended to be used as a tension spring in a battleship engine horsepower meter.

With a $500 loan to pay a company to manufacture a small quantity of Slinkies, in 1945, Richard and Betty made an attempt to sell the toy in a retail outlet store in Philadelphia. The retail store agreed to put 400 Slinkies on display for the upcoming Christmas shoppers. After a few days and no sales, Richard began to fear the worst.   He decided to go down to the store and display what the toy could do.  His wife Betty agreed to meet up with him later that night.   When she arrived, she saw a line of customers purchasing every last slinky. All 400 Slinkies sold in 90 minutes.

And the rest, as they say is history… 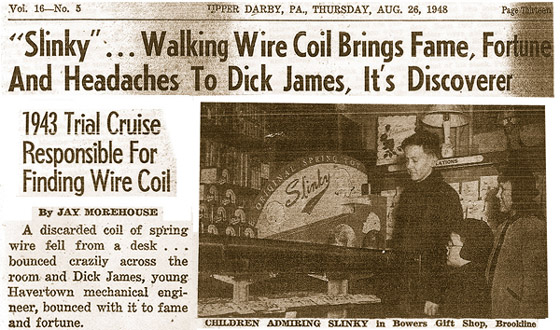