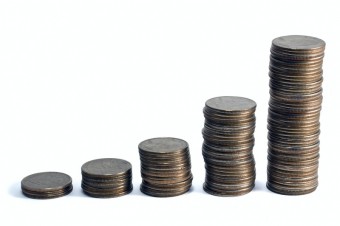 Today I found out about the Rule of 72, which is a very easy way to calculate in your head how long it will take to double your money or debt based on a given fixed interest rate, assuming the interest is annually compounded.

You can also run the calculation the other way, if you want to determine what interest rate you’d need to double your money in a given amount of time.  For instance: if you have $20,000 in savings and would like to double it in the next 10 years without adding anything to it, you’d need an interest rate of around 72/10 = 7.2%.

As you can see from the following table, the Rule of 72 is remarkably accurate:

For those curious, how the Rule of 72 works is as follows (warning: there be math ahead; skip to the Bonus Factoids if you got a headache just from reading the word “math”) 😉 :  we start with the general formula for annually compounded interest: P(1+r)Y where Y is the number of years, P is the principle and r is the interest rate.  Now we want to see when it will double, so we modify it such that: 2P = P(1+r)Y

Now the exact principle doesn’t really matter here, we just want to know when it will double, so next we simplify the problem and solve for Y, so that: Y = ln(2) / ln(1+r)

To begin with, we’ll see what value of K would work for a 10% interest rate:

If you were to do the math for a wide range of commonly used interest rates, you’ll see that K always hovers reasonably close to 72, which was possibly picked over 71 or 73 or the like due to the fact that 72 has many small divisors that are in the range of commonly used interest rates: 1, 2, 3, 4, 6, 8, 9, and 12, and within whose range the Rule of 72 is quite accurate.  The Rule of 72 though does start to break down as you get to extremely high rates, such as 100%, where the Rule of 72 gives you .72 years, which is 28% off of the actual value of doubling in one year exactly.