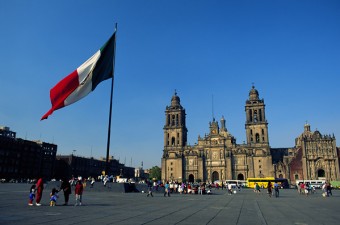 Today I found out that Mexico is really called the United Mexican States or Estados Unidos Mexicanos.  Specifically, there are thirty one states in the UMS, with 111 million people making it the 11th most populated country in the world.

The United Mexican States was originally called “New Spain” around the time they won their independence from Spain.  They then decided to name the country after the capital city, Mexico City, which was originally founded in 1524 at the same location as the Aztec capital, Mexico-Tenochtitlan.

Interestingly, the original meaning of this name is not known, though it is known it is from the Nahuatl language.  A variety of theories have been suggested about it’s meaning though.  One of the most popular is that it is derived from the secret name for the Aztec god of war, Mexihtli or Huitzilopochtli, “Place where Mexihtli lives”.

The name of the country has also changed as the government has changed.  Two other names the United Mexican States have gone by are (in English): the Mexican Empire and the Mexican Republic.