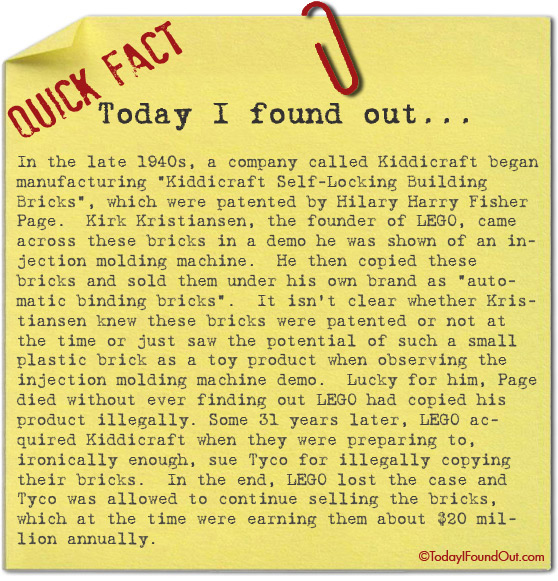 In the late 1940s, a company called Kiddicraft began manufacturing “Kiddicraft Self-Locking Building Bricks”, which were patented by Hilary Harry Fisher Page.  Kirk Kristiansen, the founder of LEGO, came across these bricks in a demo he was shown of an injection molding machine.  He then copied these bricks and sold them under his own brand as “automatic binding bricks”.  It isn’t clear whether Kristiansen knew these bricks were patented or not at the time or just saw the potential of such a small plastic brick as a toy product when observing the injection molding machine demo.  Lucky for him, Page died without ever finding out LEGO had copied his product illegally. Some 31 years later, LEGO acquired Kiddicraft when they were preparing to, ironically enough, sue Tyco for illegally copying their bricks.  In the end, LEGO lost the case and Tyco was allowed to continue selling the bricks, which at the time were earning them about $20 million annually.