November 24, 2010 Daven Hiskey
Karen asks: Why is pencil lead called lead when it doesn’t contain any? 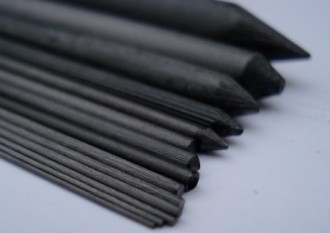 In the 16th century, a large deposit of pure, solid graphite was discovered in Borrowdale, England.  This was the first time in recorded history that high quality, solid graphite had been found.  When metallurgists first encountered this substance, they thought it was some sort of black lead, rather than a form of carbon.  Thus, they called it “plumbago”, which is derived from “plumbum”, which is Latin for “lead”.

It didn’t take people long to realize that solid sticks of high quality graphite were good for marking things. At that point, this newly discovered substance from the mines of Borrowdale became extremely valuable.  So much so that guards were eventually posted at the entrance to the mine and laws were passed to stop people from stealing the solid graphite.  In addition, once a sufficient stock of the graphite was mined, the mine itself would be flooded until more graphite was needed.

Of course, sticks of pure graphite are fairly brittle, so people started embedding them in various things such as hollowed out pieces of wood and also simply wrapped tightly in sheep skin.  Thus, the pencil was officially born with a core of solid graphite, which was known then as black lead.  The tradition of calling sticks of graphite “lead” has endured to this day.